Local Geological Sites (LGS) are recognised for their local geological diversity and earth heritage value. The Nine Wells LGS was designated because of its unique blend of geology, geomorphology, hydrology, ecology, history and education value. It is also a Local Nature Reserve (LNR) managed by the Cambridge City Council for conservation and public access. It is important historically as its springs are the main source of water for Hobson’s Conduit which flows northwards some 4kms into the centre of Cambridge. Built in the 17th century to provide good quality drinking water to the city, this is a Scheduled Monument. On the site there is a memorial to Thomas Hobson, its funder, and to the College Masters and City Councillors who worked together to create this important new water supply.

Nine Wells is  a Local Nature Reserve managed by Cambridge City Council and, therefore, has open access. It is marked on local maps and has footpaths and cycle paths leading to it. It is best approached from the Rosie Maternity Hospital, along the Addenbrookes-Great Shelford Cycleway about a 15 minutes walk. To visit, check the Cambridge City Council website. Note access and safety information on site. 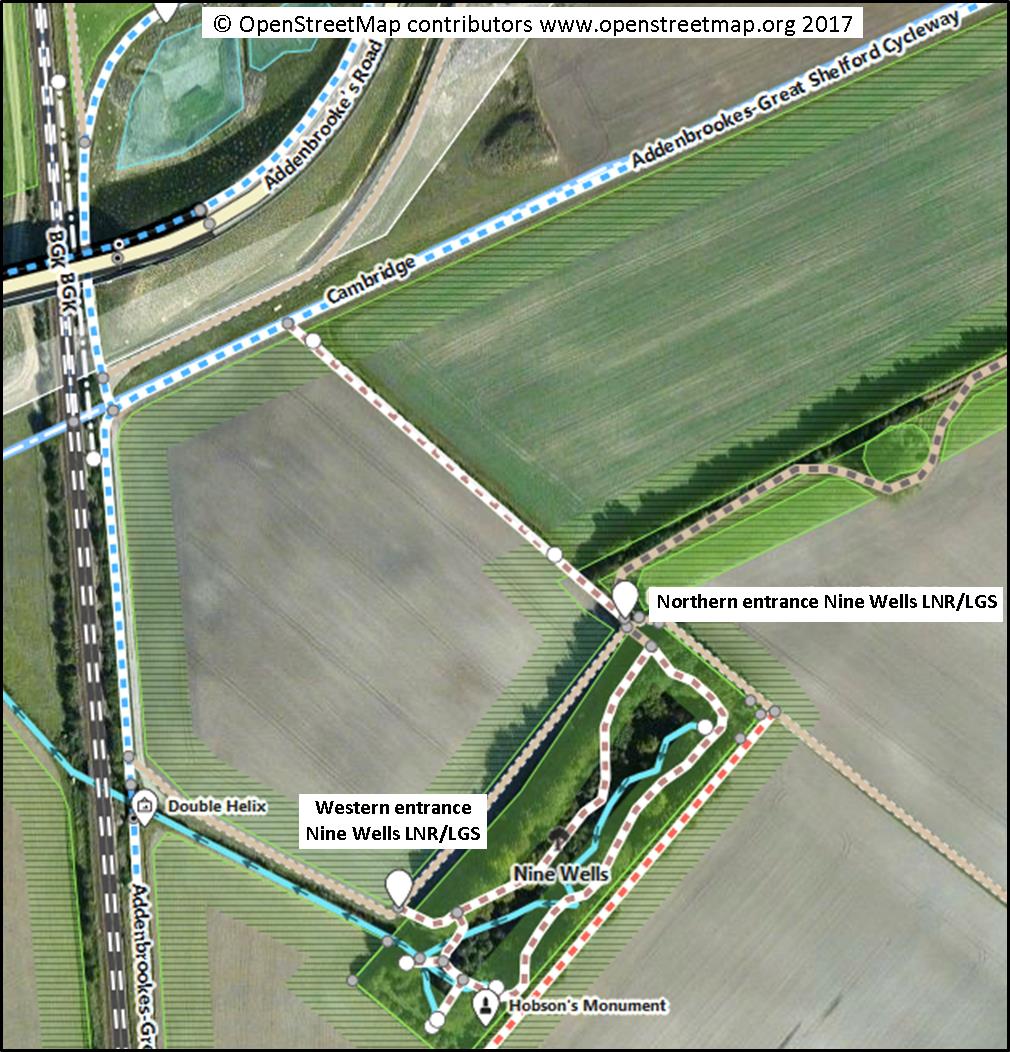 Nine Wells Local Nature Reserve was designated a Local Geological Site in February 2017. This designation highlights its geological value for scientific, educational, historical and/or aesthetic reasons. As well as being the source of Hobson’s Conduit, the chalk springs at Nine Wells are a good example of those in the south of the county that occur along the spring line at the level of the Totternhoe Stone (locally known as the Burwell Rock).

Nine Wells is found south of the Addenbrookes Biomedical Campus on the southern side of the city of Cambridge. It only covers 1.2 hectares but is quite unique for a number of reasons due to its landscape, geology, history, fauna and flora. The landscape here is marked by a change of slope between the chalkland to the south and the flat (chalk marl and clay) land to the north. The rocks here are the source of spring waters that rise from fissures in a hard band of Totternhoe Stone, known locally as the Burwell Rock. This famous layer in the chalk lies at the base of the Zig Zag Chalk, and overlies the West Melbury Chalk Marl.

The Chalk is a significant and important aquifer today and it was from here that Andrew Perne, Stephen Perse and Thomas Hobson,  among others, decided to take this clean fresh water by a ditch (Conduit) to the City of Cambridge over 400 years ago. This would be better for the citizens of Cambridge than the water from, the then filthy, Kings Ditch. The reserve is also important for its wildlife too (although its value has diminished in recent years) as rare fauna and flora can be found in these local chalk springs due to the water from the springs being at a fairly constant temperature and of a good quality, There is a potential threat from nearby development  which might jeopardise its unique features and also those of archaeological features that are close by. Another concern is that, because the chalk aquifer is still a source of water today, the level of the water table is being lowered due to excess water extraction which can reduce the water flowing from the springs. This last problem is being addressed as the water company is now replenishing the underground water by a system of pipes and pumps so the spring flow will be maintained.

Nine Wells is marked on local maps and has footpaths and cycle paths leading to it. It is a Local Nature Reserve managed by Cambridge City Council and, therefore, has open access. 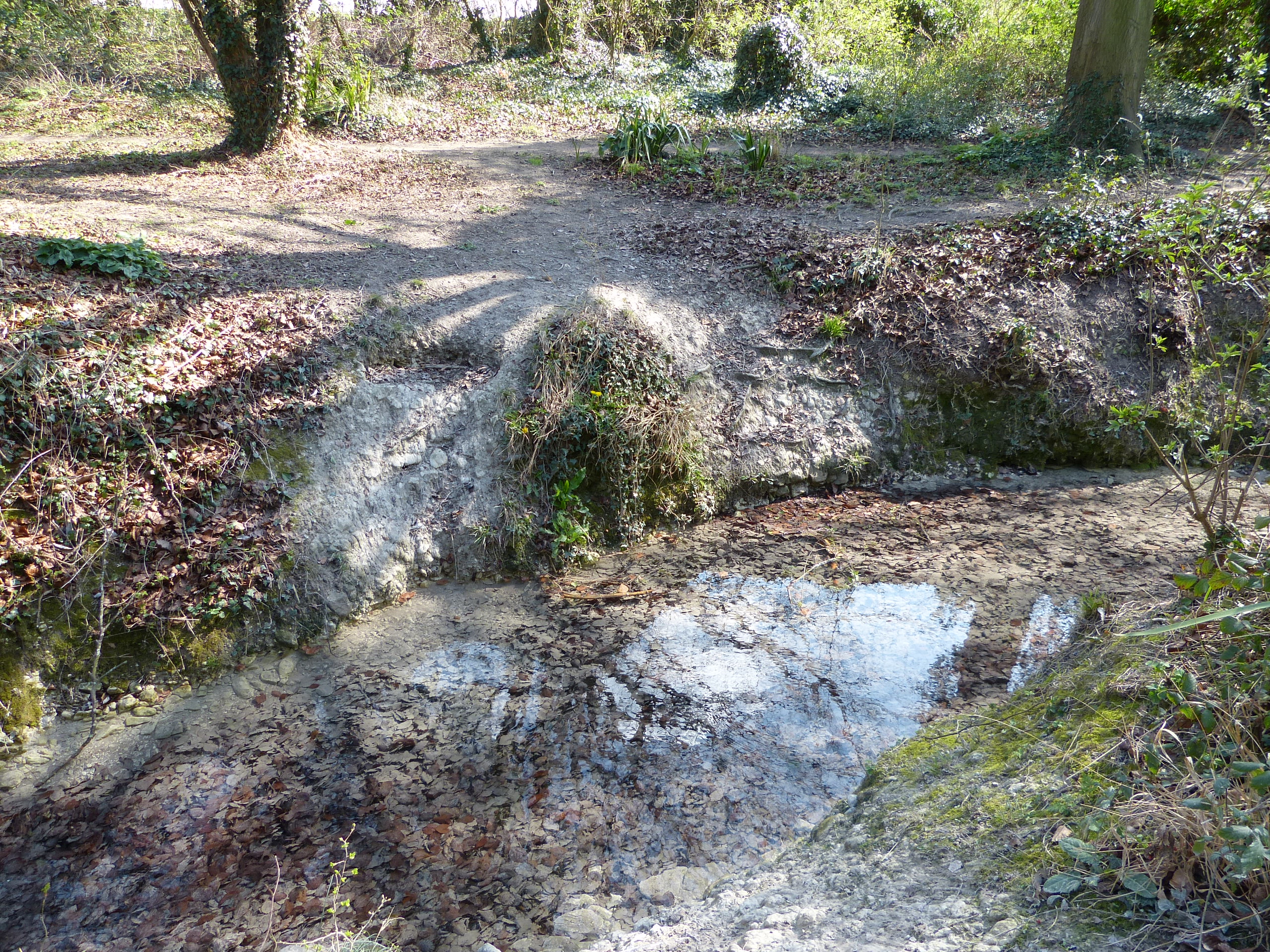 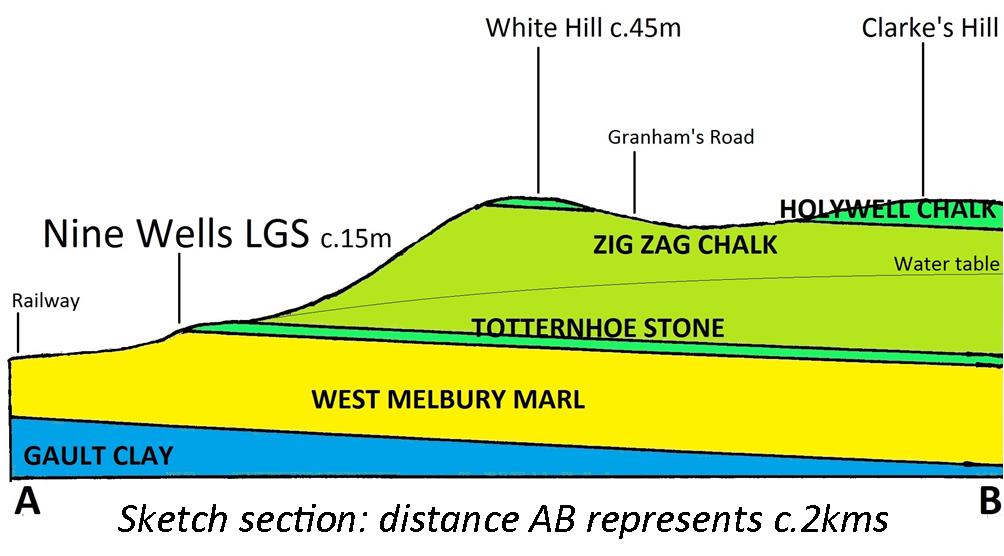 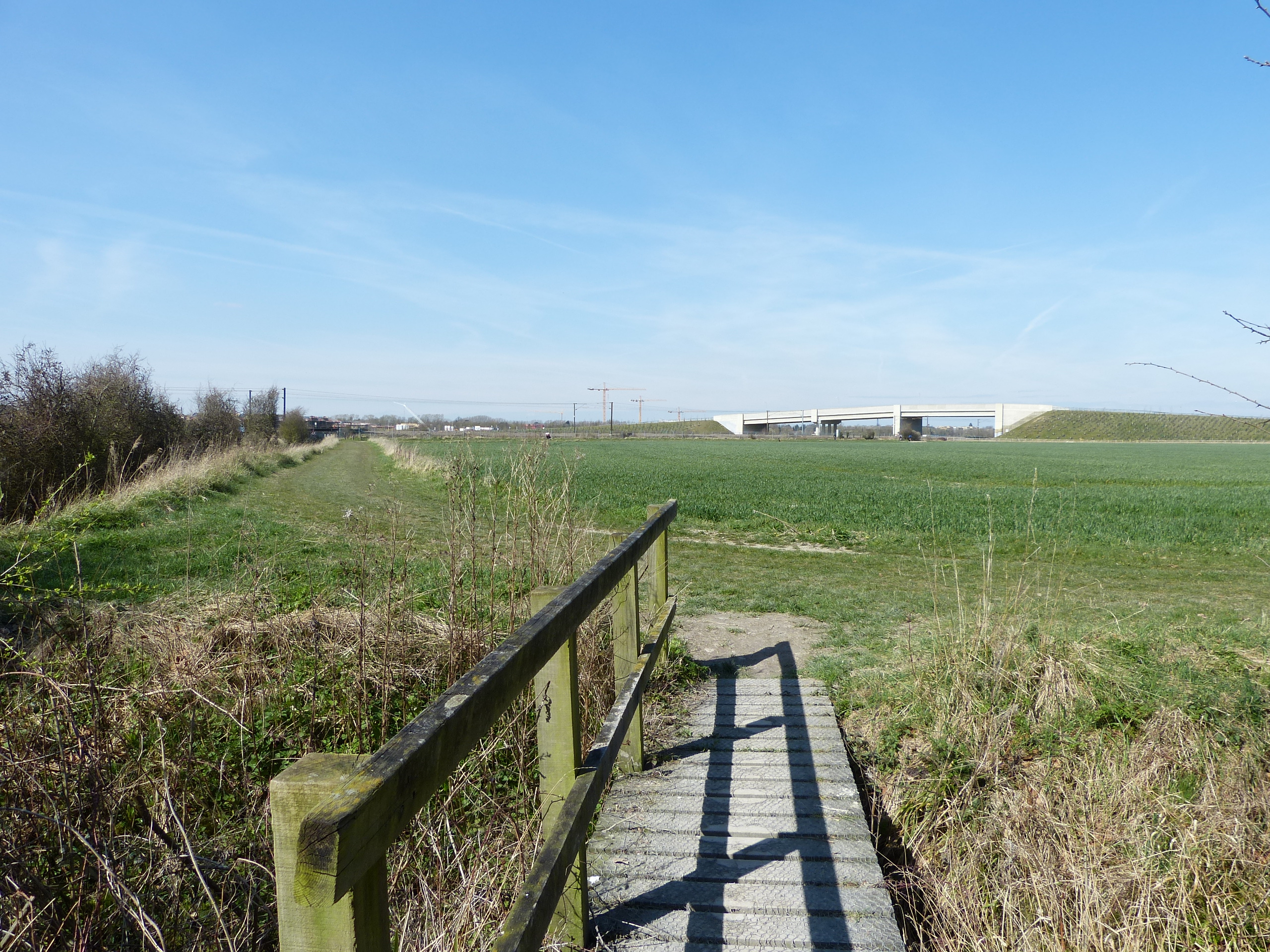 Nine Wells is situated in the Cam River Valley at the base of the Gog Magog Hills, south of Cambridge. The regional dip of the strata is to the south east, with the surface slope from the top of White Hill down through Nine Wells towards the railway and the River Cam forming the scarp slope of the major Chalk escarpment that runs from the Chilterns to the north Norfolk coast. The geological map and sketch section show the location of Nine Wells on the Cretaceous Grey Chalk where the thin stratum of Totternhoe Stone outcrops between the Zig Zag Chalk and the underlying West Melbury Marl (a clayey Chalk). There is a spring line at the level of the Totternhoe Stone along its outcrop in the south of the county.

At Nine Wells the water emerges at four main springheads and many minor fissures, combining to form the Chalk stream, Hobson’s Brook. The front page upper photograph shows the spring head located in the north-east corner of the site. The springs emerge a few metres behind the line of trees (see photograph below) along the south-east boundary of Nine Wells, which lies on the structural terrace associated with the Totternhoe Stone (see sketch section). Here, the land levels off between 20 and 15m OD at the foot of White Hill which rises to c.45m off to the right of the photograph, and which is capped by an outlier of the younger Holywell Chalk (the lowest stratum of the White Chalk).

The geology map shows Nine Wells in relation to the Chalk formations and the deposits in the Cam Valley. 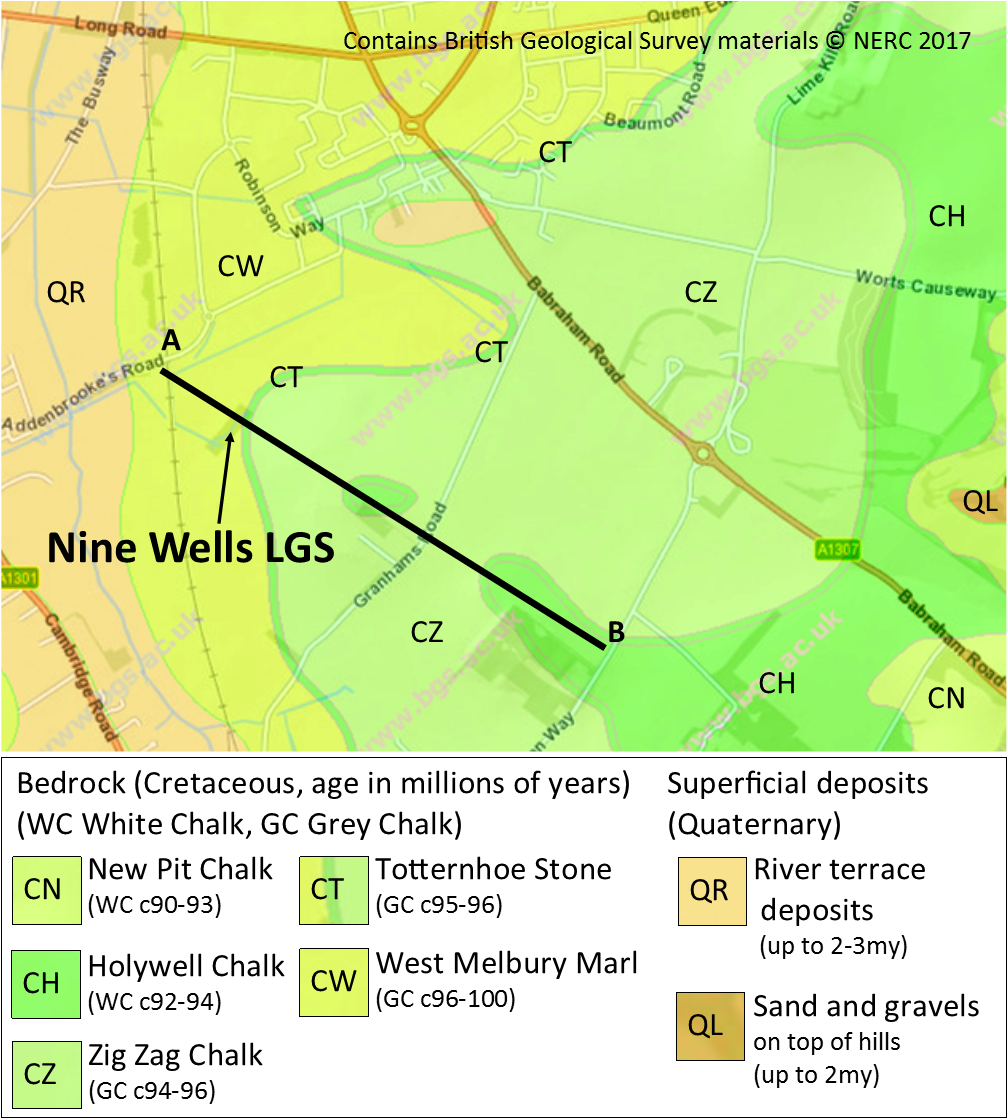 Totternhoe Stone is typically a hard, fissured, fine grey sandy Chalk limestone consisting mainly of small, even-sized shell fragments of the extinct  bivalve mollusc Inoceramus, indicative of shallow-water conditions during its formation. The flow of  water down through the permeable Zig Zag Chalk and Totternhoe Stone is held up by the underlying relatively impermeable Marl. The water travels  along fissures in the Totternhoe Stone, reaching the surface and emerging through springs at its base.

At Nine Wells, the channels and springheads are confined within artificially-steepened banks a metre, or more, high. The clearly bedded and fractured bedrock is exposed in places along the water’s edge (front page lower photograph). Elsewhere, it is covered by vegetation or material that has slipped down the banks. The Totternhoe Stone is also known as Burwell Rock due to it having been quarried in Burwell for use as building stone (clunch).

Due to the water’s quality and character, the springs are very important ecologically, as are the many Chalk springs in the south of the county. Nine Wells was once designated a Site of Special Scientific Interest (SSSI) due to its high biological value but lost this status after the summer drought of 1976 when the springs dried up and Crenobia alpina (a flatworm) and Agapetus fuscipes (a cased-caddisfly) failed to survive. The temperature of the spring water is a constant  10.4°C, being cool enough for the flatworm and warm enough for the caddisfly.

For many decades, spring flow at Nine Wells has been inexorably reduced by over-abstraction from the Chalk aquifer at Babraham, a contributory factor in 1976. Work began in 2017 on a project, managed by the Environment Agency, to compensate for this by pumping water from the aquifer into injection boreholes along the south-east-facing boundary so that it emerges through the nearby springheads. 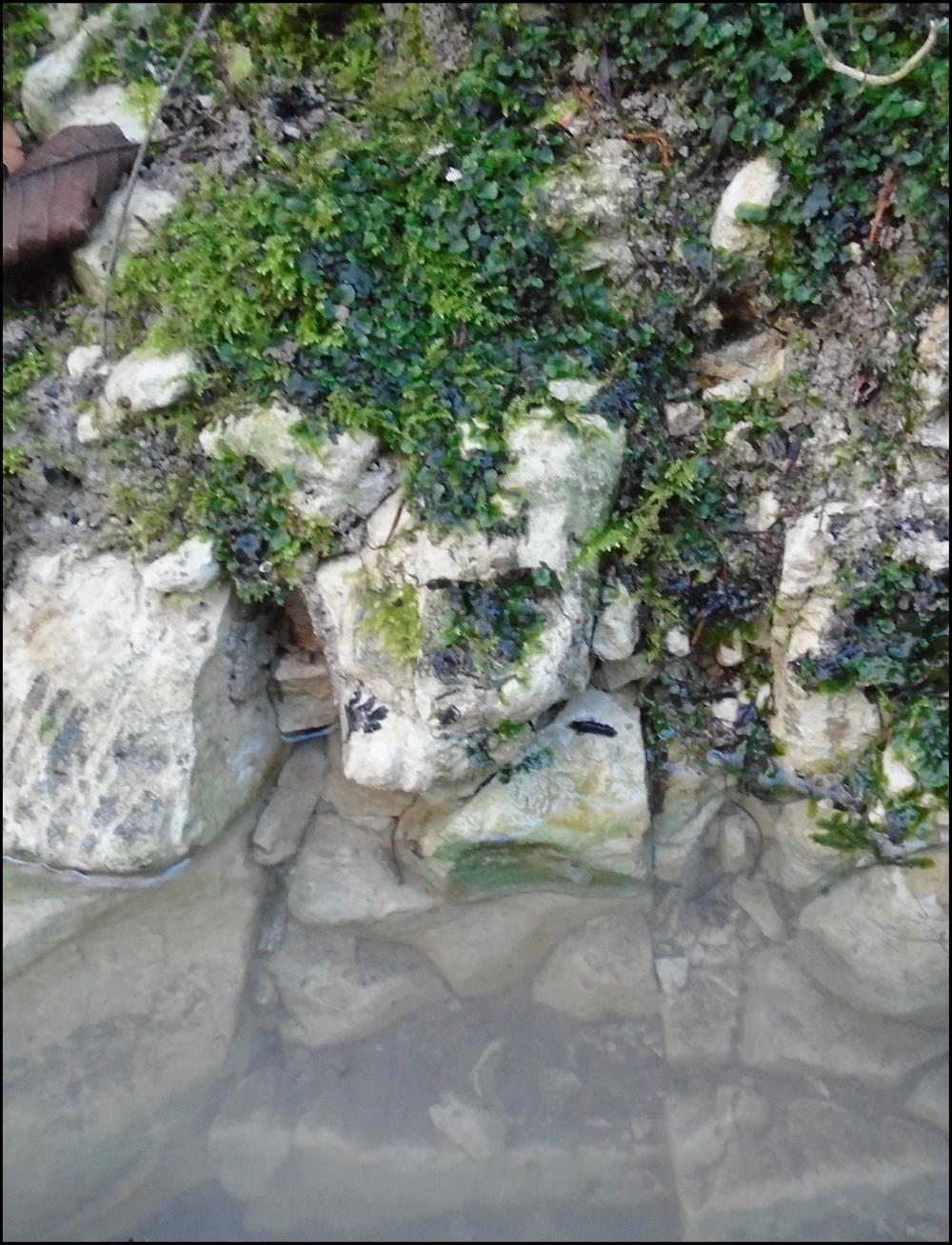 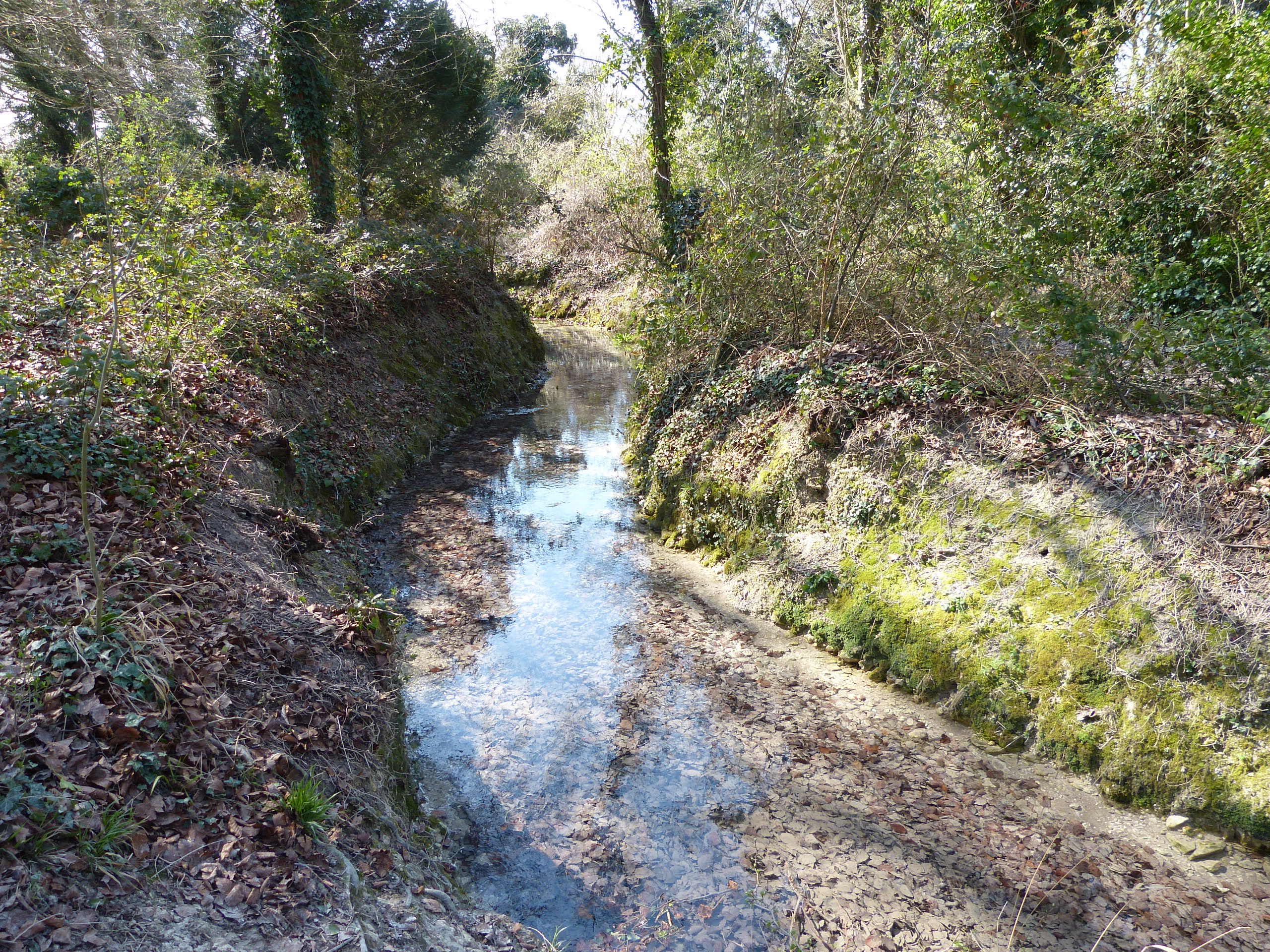