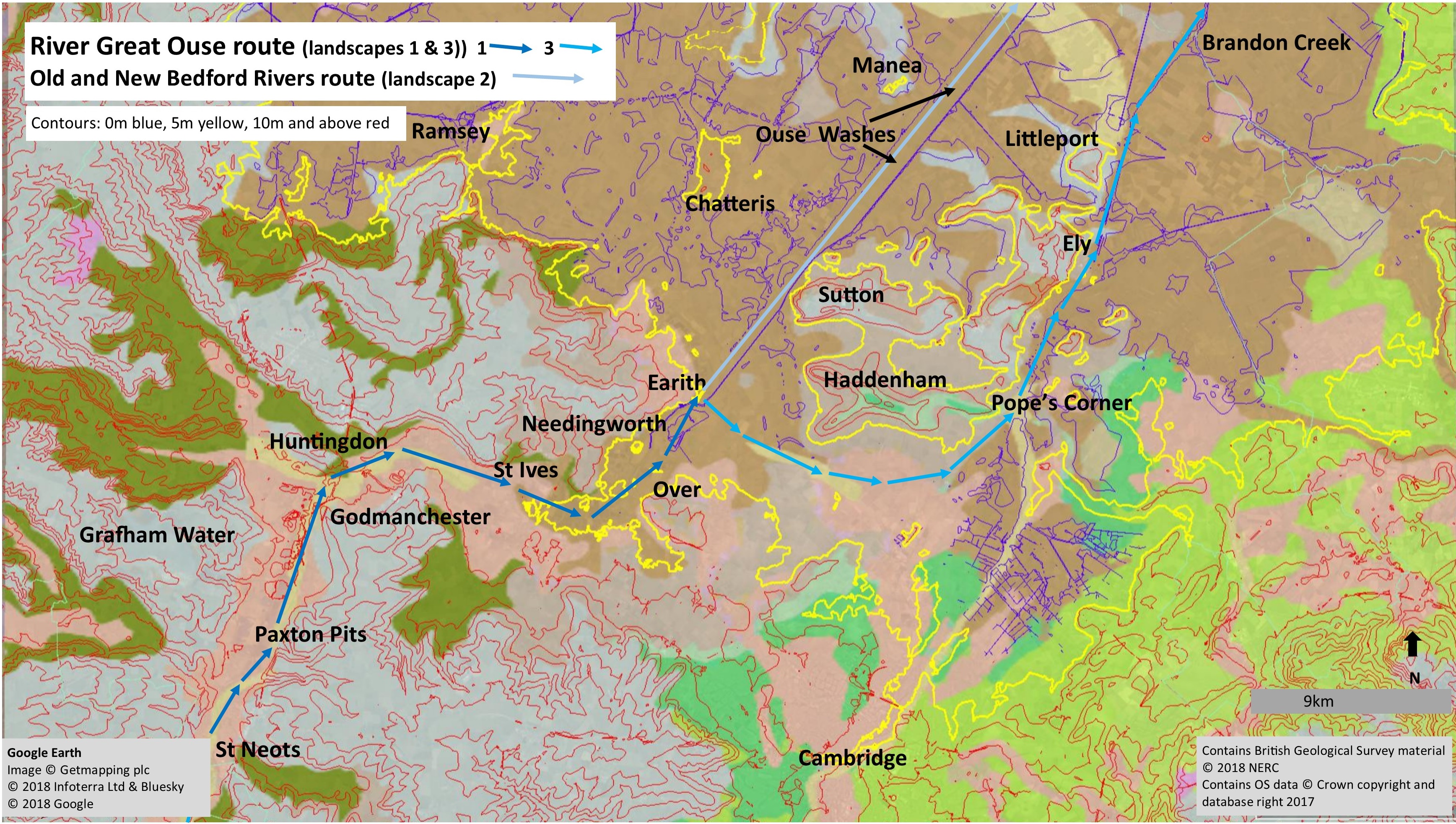 The River Great Ouse in Cambridgeshire in relation to the contours and geology and its three distinct landscapes. For a key to the geology see the British Geological Survey map viewer.

The River Great Ouse is the fourth longest river in England. It rises near Wappenham in Northamptonshire and flows through Brackley, Buckingham and Milton Keynes before entering Cambridgeshire south of St Neots. It then flows through Huntingdon, St Ives, Earith and Ely before passing into Norfolk near Brandon Creek, finally travelling past Downham Market and entering the Wash at Kings Lynn. The four longest rivers in England are the Severn (220 miles, 354 km.), the Thames (215 miles, 346 km.), the Trent (185 miles, 297 km.) and the Great Ouse (143 miles, 230 km.).

The bedrock underneath most of the course of the River Great Ouse is mid and late Jurassic in age, and consists mainly of mudstones laid down in a warm sea between 175 and 151 million of years ago when ‘Cambridgeshire’ lay nearer the tropics, at the latitude where the Canary Isles are today. Although younger bedrock would have covered the area after this, it has been removed by millions of years of erosion, when the land surface was above sea level.

Finally, the area has undergone a major change during the Pleistocene ‘Ice Age’ which started c 2.6 million years ago. A significant period of erosion (and deposition of glacial material) occurred during the Anglian glaciation, which lasted from about 478,000 to 424,000 years ago. For much of this time, thick ice covered the county, reaching as far south as north London, drastically altering the landscape by removing much of the rock above the present bedrock level. Under this ice rivers flowed carrying rocks and gravel which wore deep valleys into the bedrock. Many of these valleys remain and some are the courses of modern rivers including the River Great Ouse. After this, the climate changed from mild to cold and back on several occasions and there was a further glaciation, the Tottenhill, about 160,000 years ago that eroded the fen basin to, more or less, its current form. During the cold periods of freeze and thaw the landscape was further modified, especially during the last glaciation, the Devensian (c 29 to 18 thousand years ago), when the county experienced periglacial conditions although not covered by an ice sheet.

This is the wide valley of the River Great Ouse from St Neots to Earith which is one of the larger landscape features of the county cutting through higher land that is covered with Glacial Till: the Western Plateau to the south and the borders of the Fen Edge to the north. The Glacial Till, mostly finer material but with some larger deposits, was left when the glaciers melted. Other glacial material was washed into the river valleys forming sand and gravel areas which were later added to by deposition from the river. The river has since cut into these deposits which has left a series of river terraces on the sides and bottom as the valley deepens. The oldest terrace is Terrace 3, and the youngest Terrace 1, the latter usually being at a lower elevation than the others, sometimes forming the valley floor. Terrace 3 of the Great Ouse is well represented by the level land between Needingworth and Holywell. Along much of the river valley Terraces 2 and 1 occur but distinguishing them is difficult due to their similar elevation, with possibly some mixing of material. At times in the past, the river was much more active and moved across the valley as a braided river with long narrow islands between fast flowing streams causing very variable deposits. The most recent deposit is fine alluvium left by slower flowing water, and still being added to in times of flood. The variability of these deposits is reflected in the distribution of gravel workings today which tend to be where the gravel is deepest (and where planning permission has been given). Gravel is used to make concrete which is one of the construction industry’s major requirements.

The flat expanse of land that now forms the famous Ouse Washes is Landscape 2. This runs north east across the Fens from Earith into Norfolk. Due to the lack of gradient, rivers in the Fens meander across the flat lands but major drainage work has been carried out over hundreds of years to modify and speed up their flow to prevent flooding. Between 1652 and 1670 work began, steered by the Dutchman Sir Cornelius Vermuyden, to construct the Old and New Bedford Rivers from Earith to near Denver in Norfolk (for 20 miles, 32 km.) as high-level water carriers to carry upland river water to the sea. Between the two are large areas of ‘wash’ land which stores water in times of flood due to the lower inner banks of the two bordering channels, with the higher outer banks protecting the surrounding farmland. Much of the current water flow is diverted at Earith along these two major waterways – the New Bedford (Hundred Foot) and Old Bedford (Delph) Rivers – to be taken directly north east to the Denver Sluice. From here it continues on to the Wash. An explanation of how water flow is managed in the Ouse Washes can be seen in this animation by the Environment Agency.

This is the gently meandering course of the River Great Ouse east from Earith, around the southern side of ‘the Isle of Ely’, where it is joined at Pope’s Corner by the River Cam coming up from the south. The combined waters then flow north through Ely, past Littleport to the border of Norfolk at Brandon Creek. This part of the rivers course passes mostly through farmland and is a favourite of those wanting a more tranquil journey along rural waterways. As you approach Ely, views of the cathedral gradually appear on the horizon adding an extra dimension to the landscape and the history to be encountered on the journey. The river between Earith and the River Cam, is also known as the Old West River and alongside it is the Stretham Old Engine, an example of one of the steam engines that played a major role in the fenland drainage.

The pattern of drainage in the fenland is one of the most complex in the country and has been changed by man dramatically over the last several hundred years, to minimise damage from flooding and to maintain or create important waterways. An earlier course of the River Great Ouse flowed from Earith across the fens, north towards Ramsey and linked with the River Nene to continue on to Wisbech and the River Nene outfall at the Wash. From a management point of view, the present, and highly controlled, River Ouse is the result of many centuries of endeavour and setbacks. It is controlled by many locks and sluices which are used to manage water flow, especially during periods of flood. Two are of particular interest: Brownhill Staunch is the highest point up the river that receives tidal water, and Denver Sluice is a hub that controls drainage over a large area of the Fens. Over the years, first windmills, then steam engines, diesel and electric pumps have been used to drain the fenland and pump water into the high-level drains. The water in the high-level drains is usually well above the level of the surrounding countryside and the very large banks have to be carefully maintained. The soils in the Fens are very variable influenced by marine clays, lake marls and peat, the latter formed in freshwater conditions when flooding produced waterlogged conditions. The peat can be very fertile but drainage causes it to oxidise and shrink and this is an increasing problem as not only does it lower the land, it also reduces the area and depth of peat, producing poorer soils. Another, even more significant issues is that the process releases large amounts of carbon into the atmosphere. The local farming reflects the soils. On the Glacial Till areas higher up in the valley, cereals and oil seed rape are the main crops. On the various fen soils a wide range of crops can be grown; as well as cereals and oil seed rape, sugar beet, potatoes, carrots, brassicas, salads and soft fruit can be found. Small areas of sand and gravel also occur in places in the fenland, remnants of the deposits from previous water courses. Because of the reduced power of the water flow in the fenland, compared to upriver, the sands and gravels of Terraces 2 and 1 have not undergone so much mixing and can be differentiated here. The River Great Ouse has always been an important means of transport for goods moving inland from ports on the Wash such as Kings Lynn. St Ives was an important port with a market charter dating from 1110. Above St Ives access became increasingly difficult the further up the river you went, with access to Bedford being spasmodic until 1985 when navigation was restored giving the city river access to the sea.

The River Great Ouse Valley is of significant international importance for nature conservation and also provides recreational possibilities. The Ouse Washes are a RAMSAR site (international wetlands designation) with areas managed by The Wildlife Trust and RSPB (Welches Dam), and (at Welney just over the Norfolk Border) by the Wildfowl and Wetlands Trust. There are also nature reserves in the old gravel pits at Paxton Pits near St Neots, Hinchingbrooke Country Park near Huntingdon, Houghton  Meadows (west of St Ives), Godmanchester, Fen Drayton Lakes near St Ives, Needingworth (Ouse Fen) and Ely (Roswell Pits). The latter is also a geological SSSI for its assemblage of marine reptile fossils found in the Kimmeridge Clay (Jurassic).  Grafham Water, a major reservoir near Buckden, receives much of its water from the River Great Ouse and also has an area protected for nature conservation. Portholme Meadow near Godmanchester is one of the largest Lammas Lands in England; Lammas Lands grow hay during the summer which has to be cleared by Lammas Day, 12th of August, and then they open for commoners to graze animals until 6th of April. The wild flower display is excellent. The Ouse Valley Way long distance path runs from the source to the sea and the Fen Rivers Way runs along the course of the Great Ouse from Pope’s Corner to King’s Lynn. 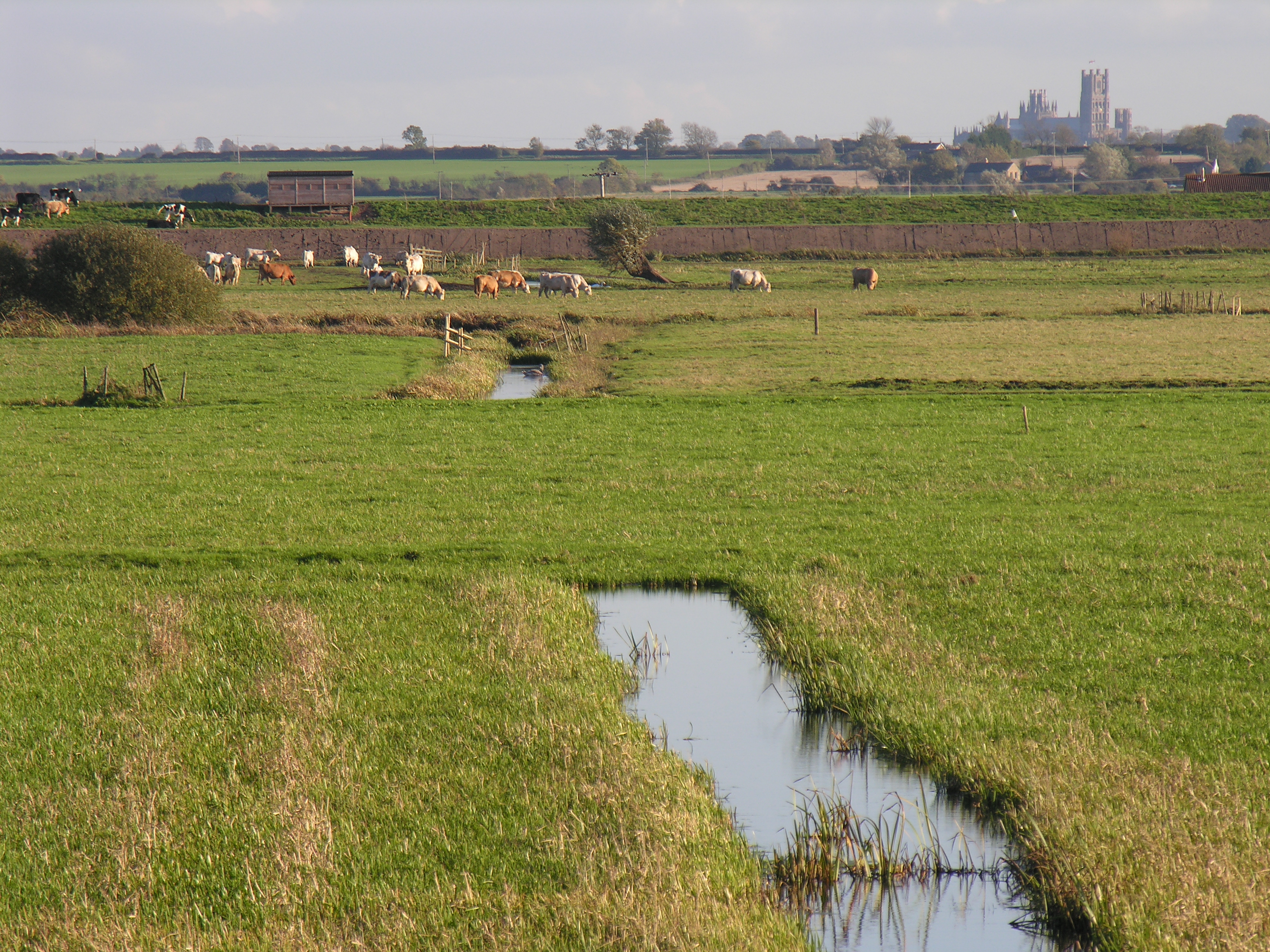 View from the Ouse Washes towards the Isle of Ely, including the cathedral 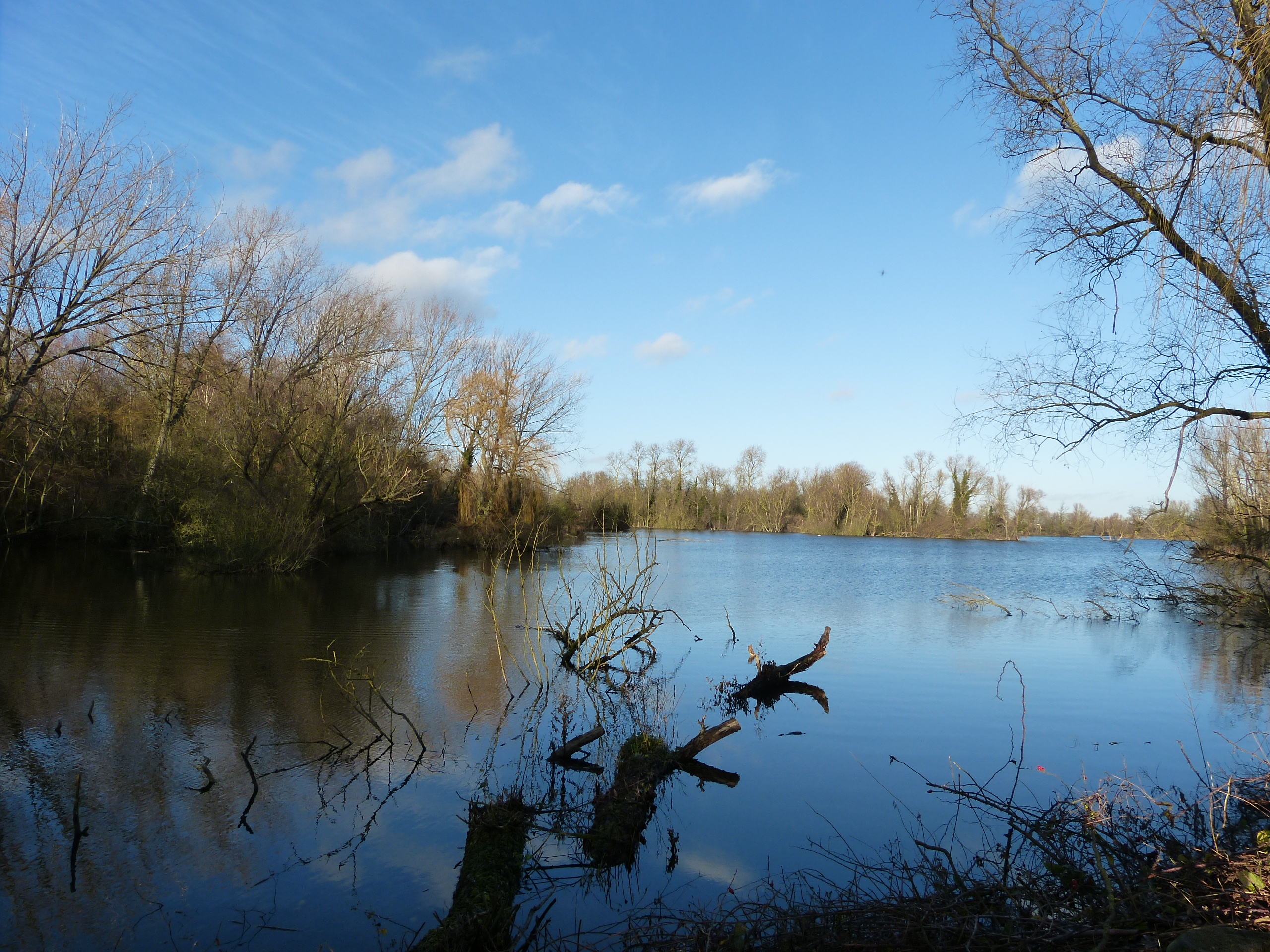 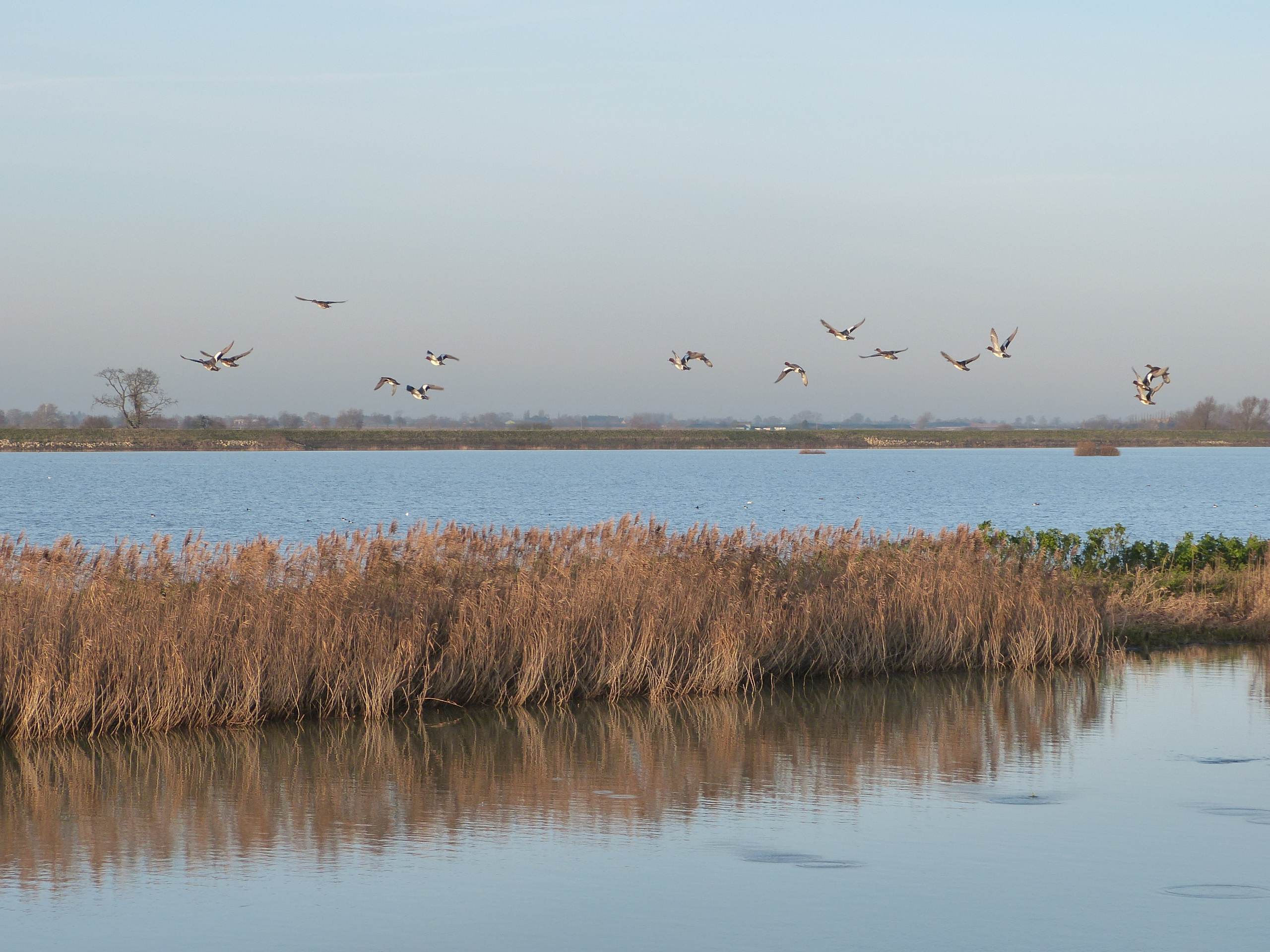 The southern end of the Ouse Washes near Earith 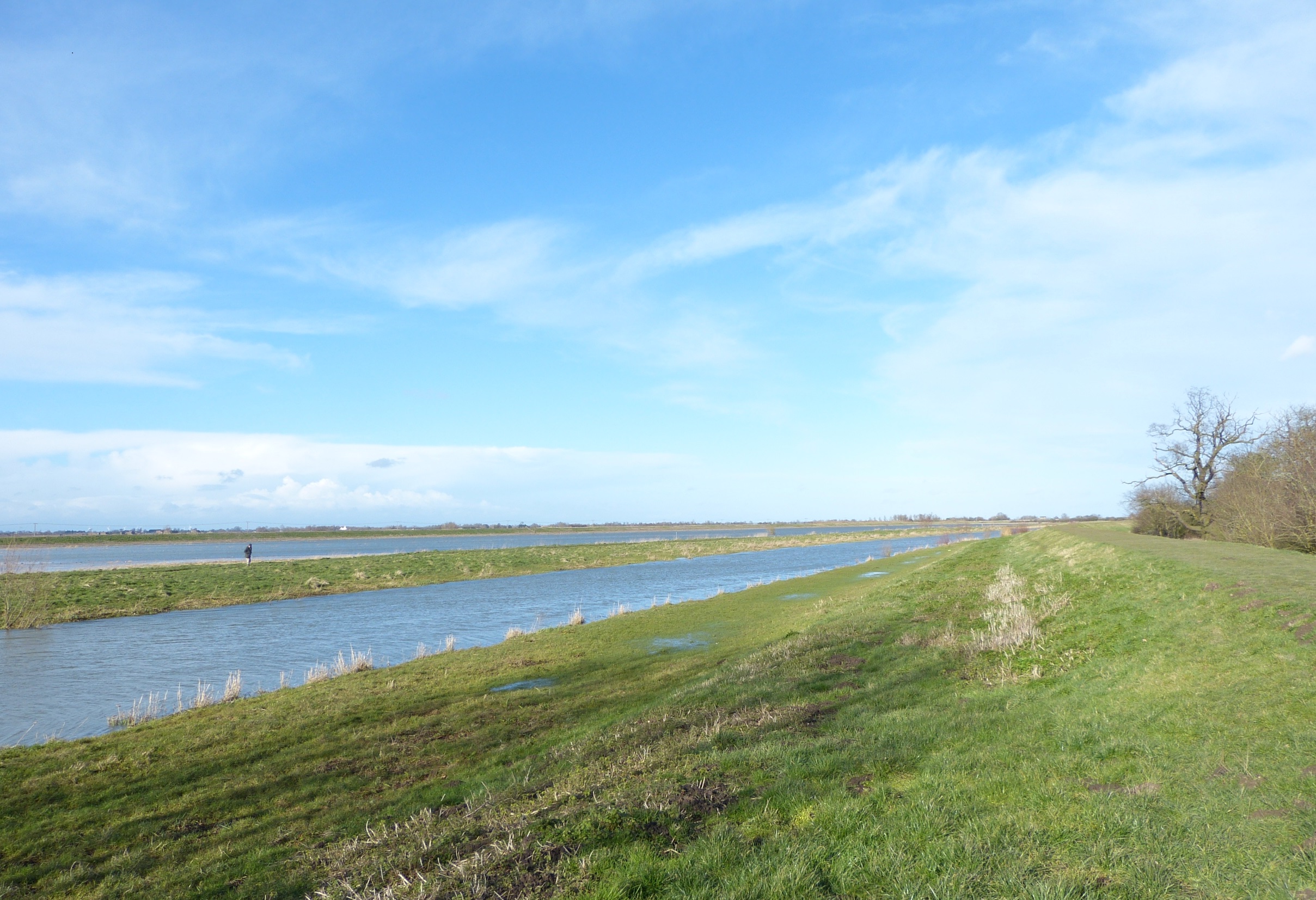 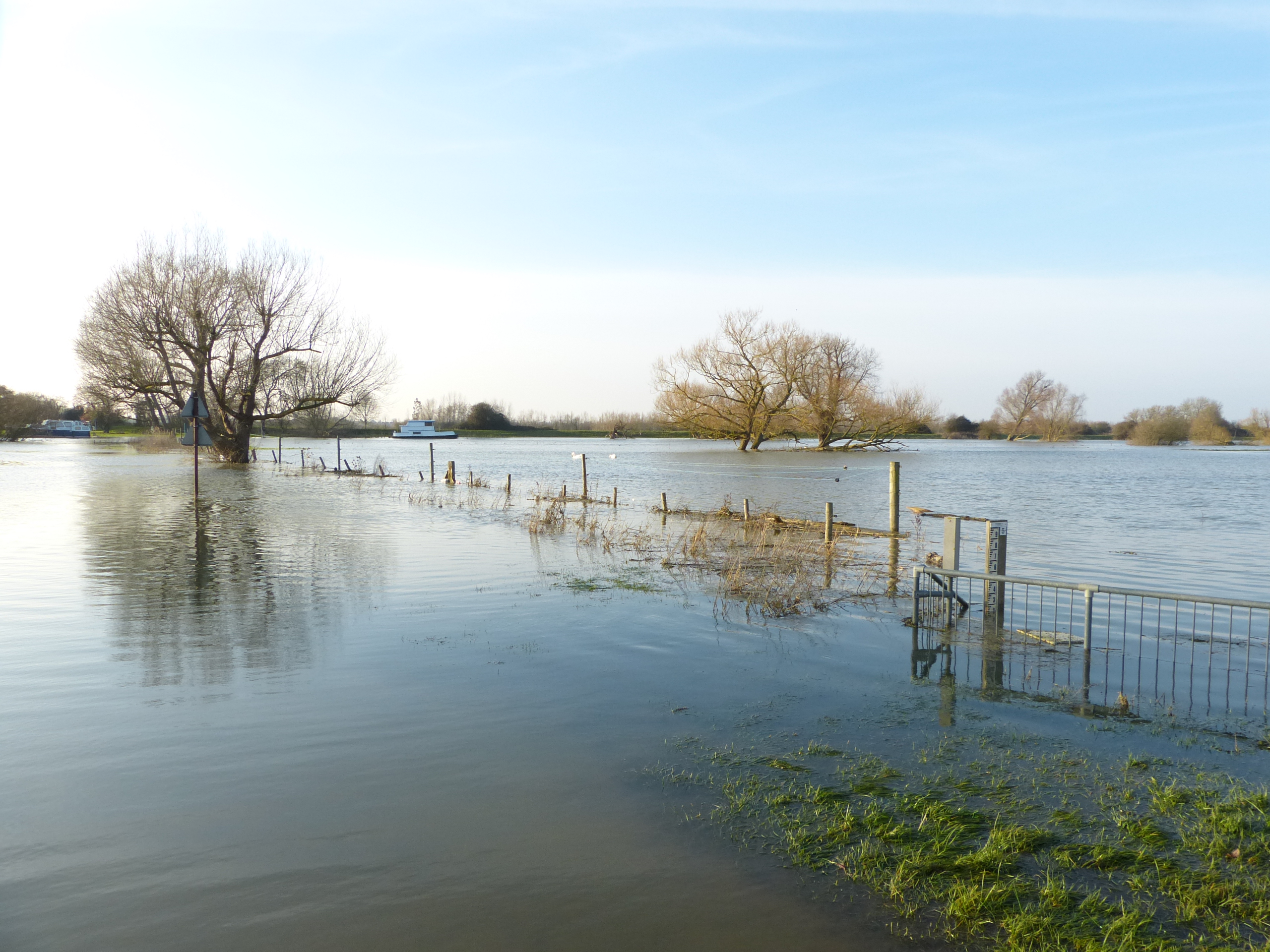 Ouse in full flood near Over 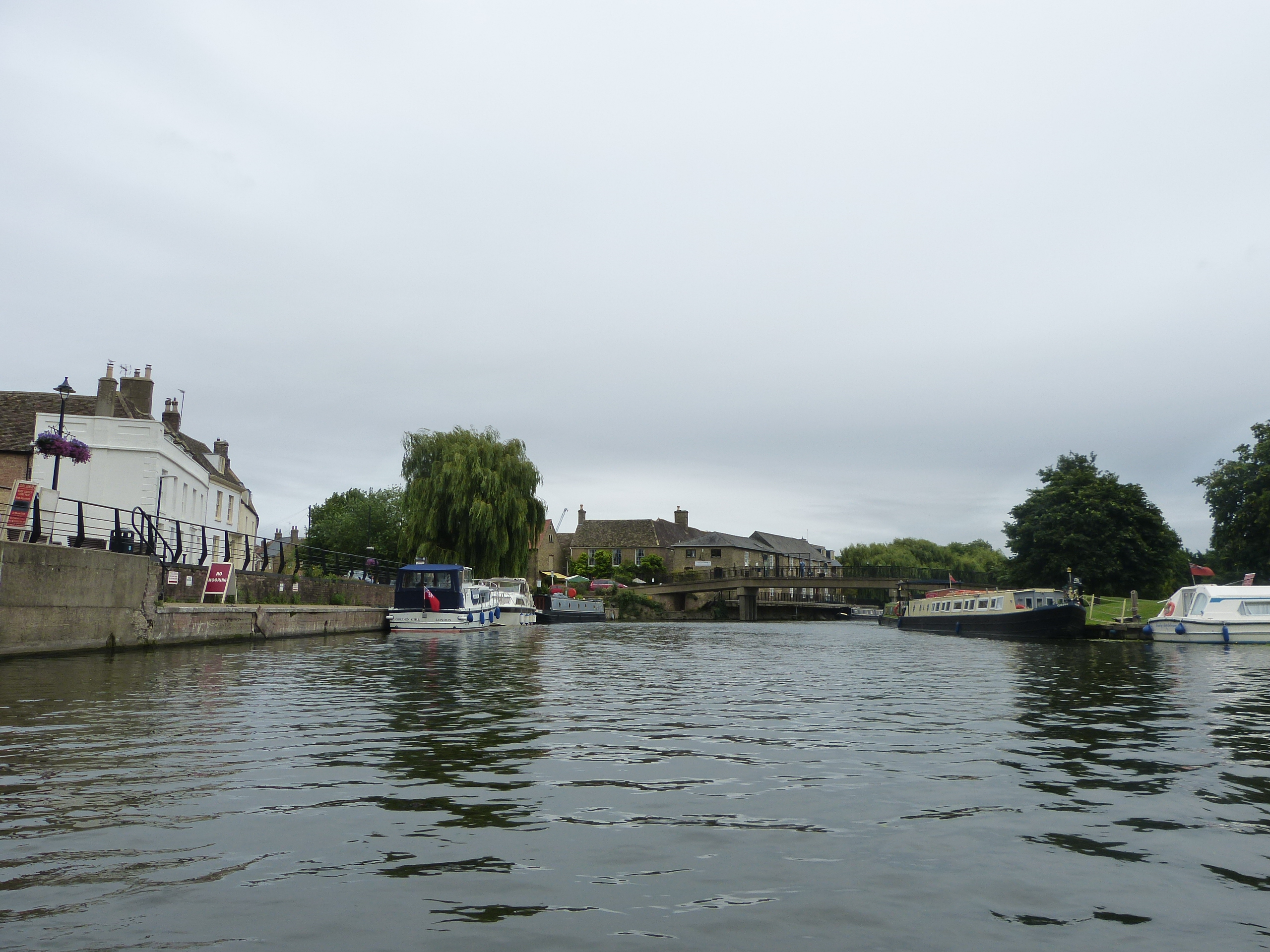 The Ouse runs close to the centre of Ely 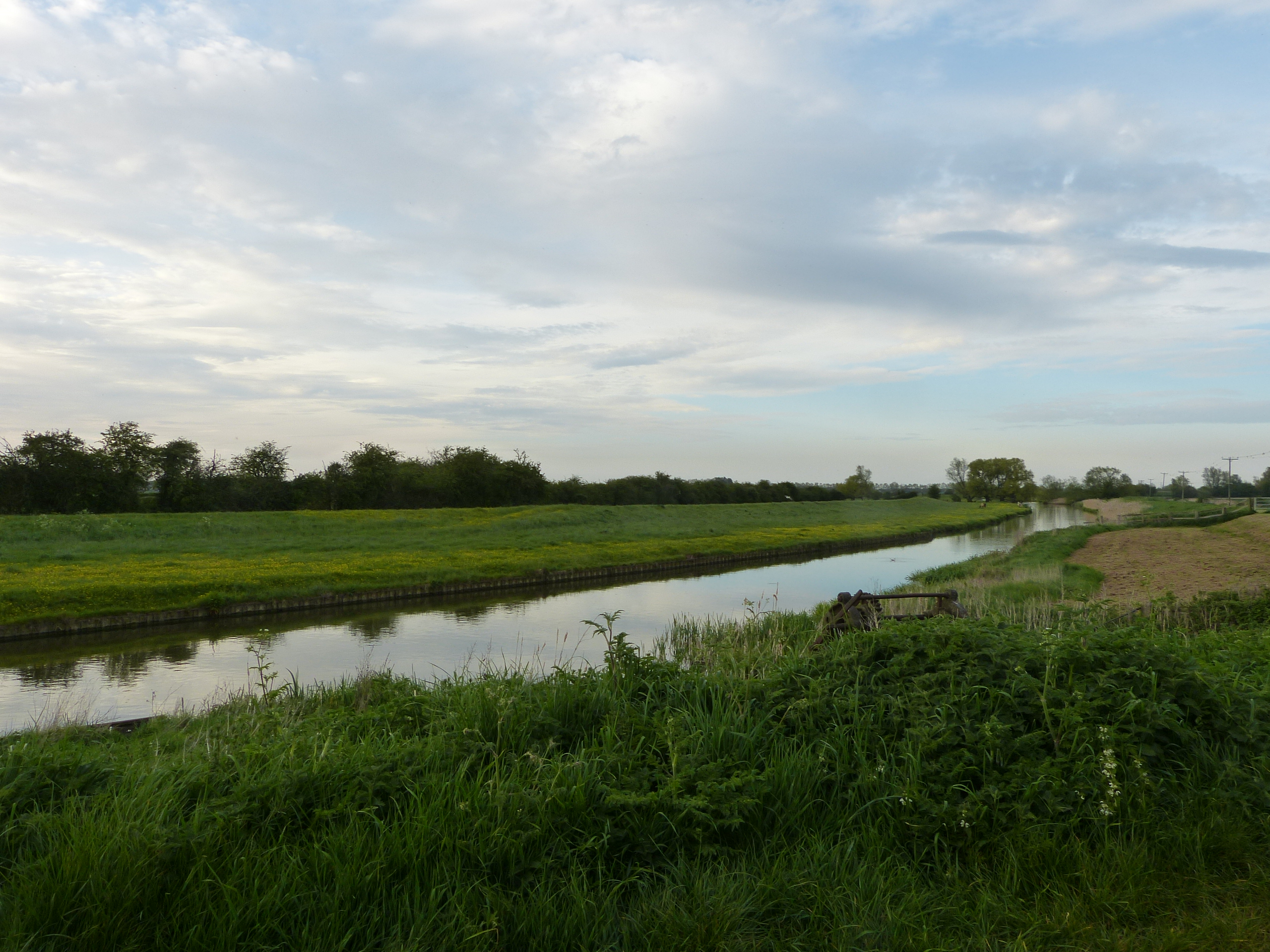 The ‘Old West River’ near Stretham 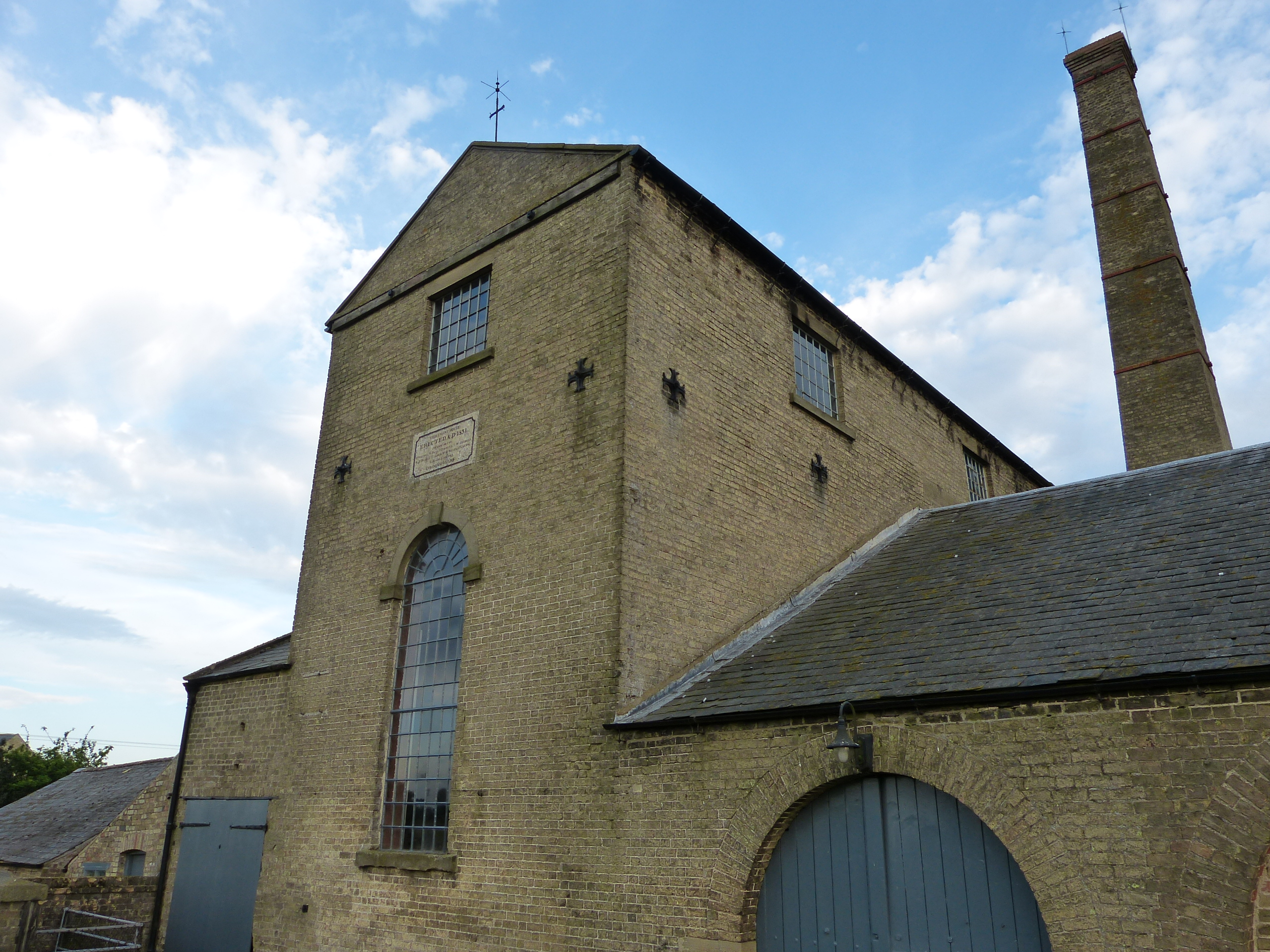 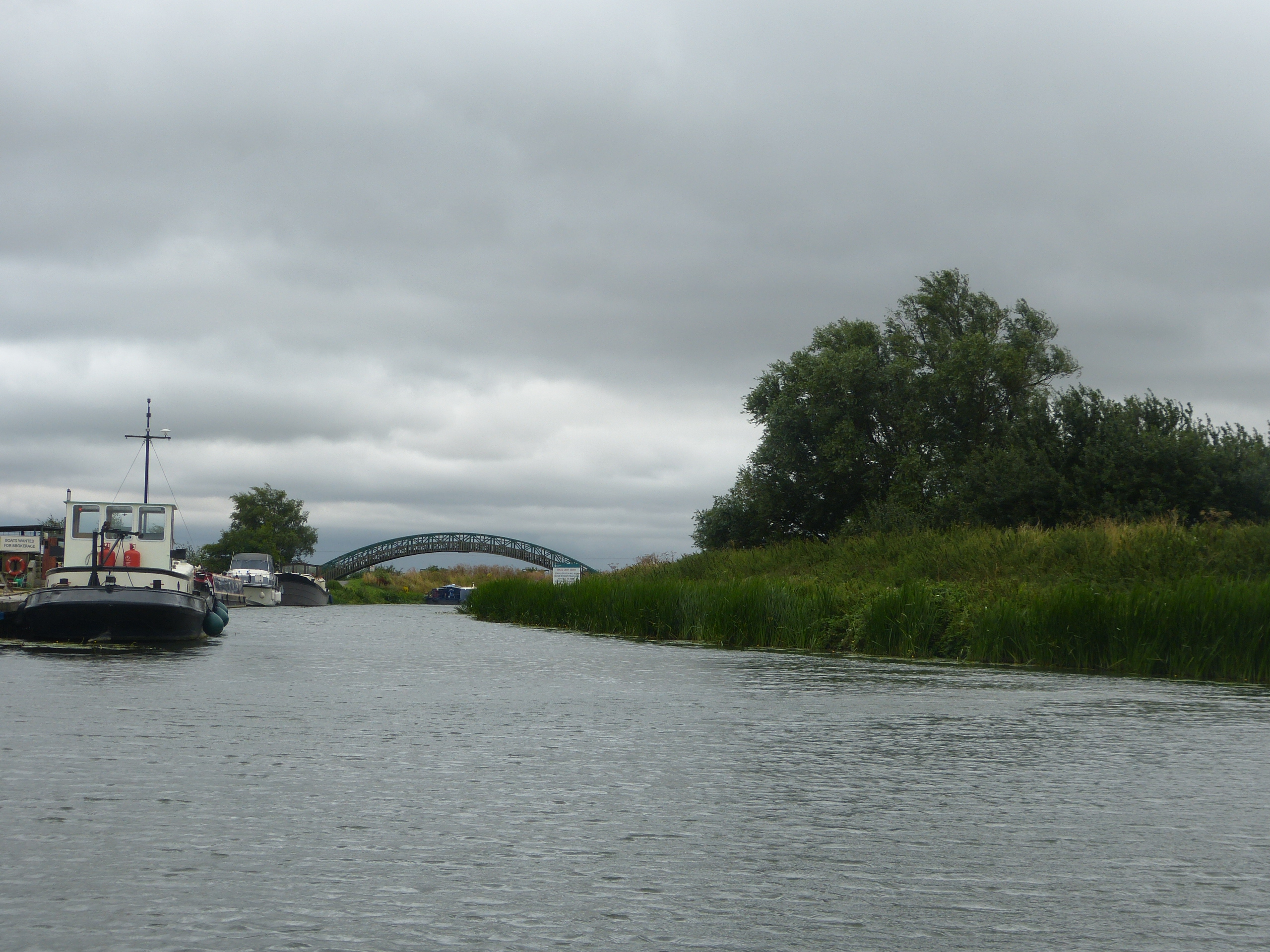 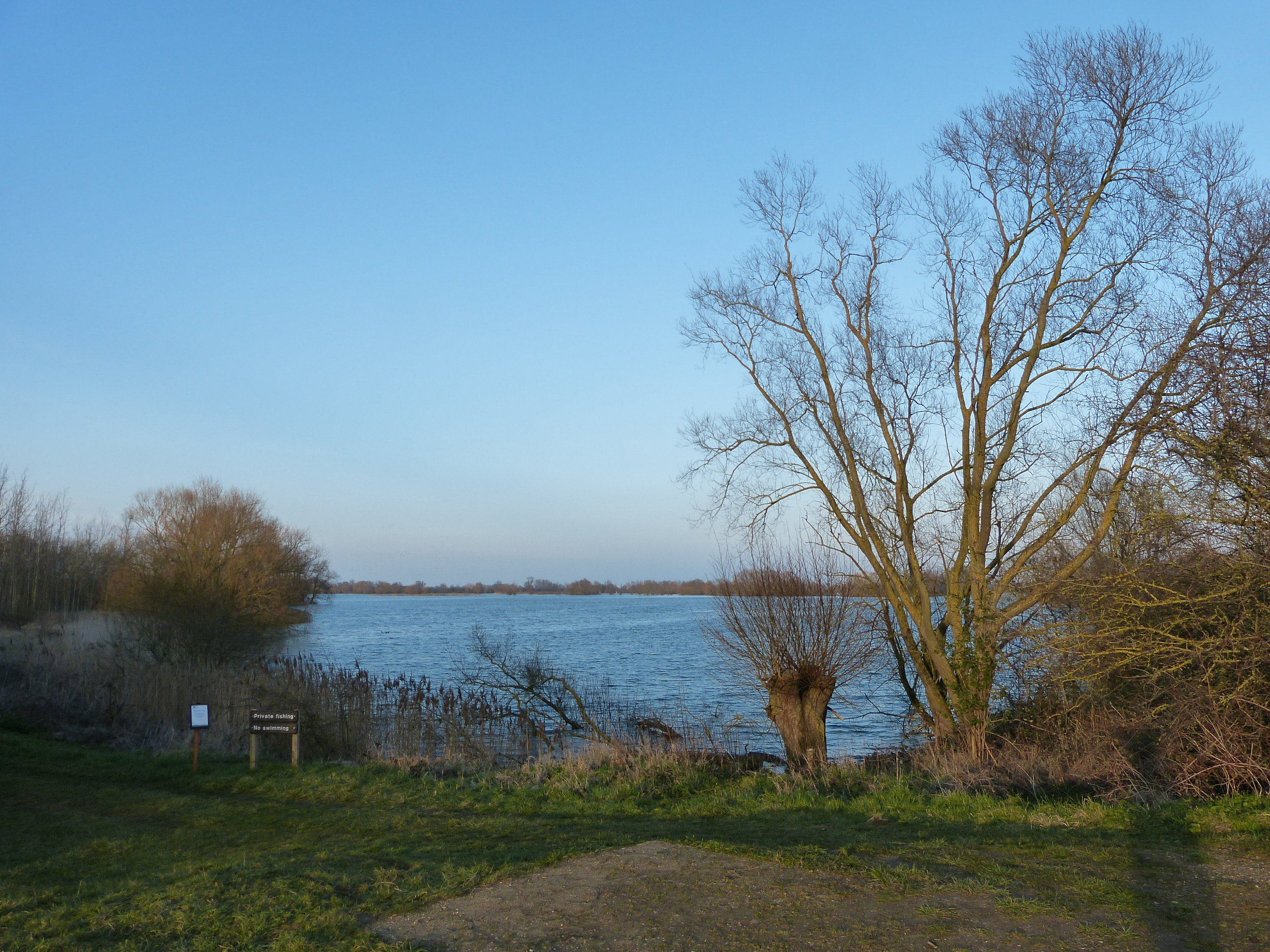 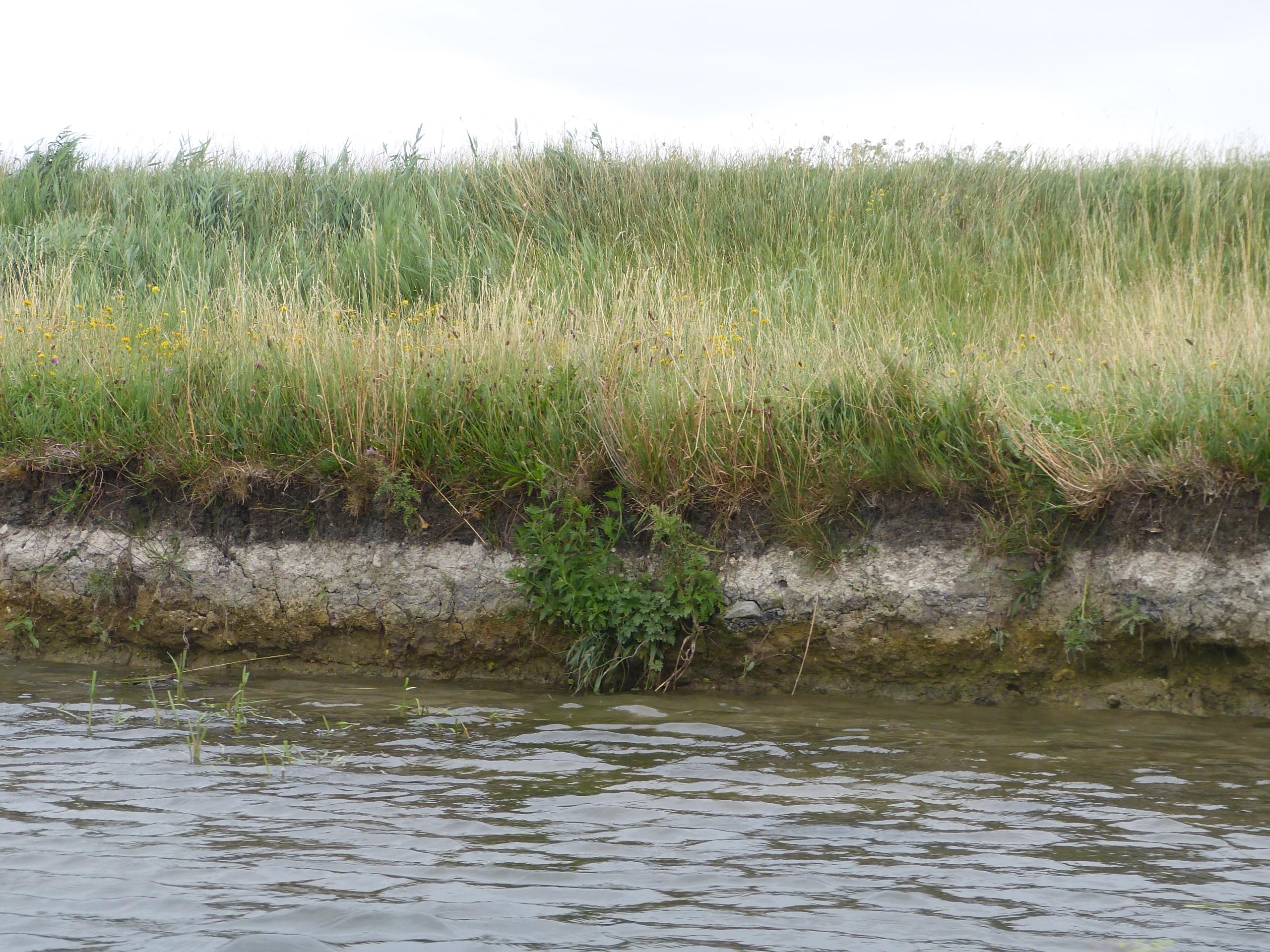 Layers of alluvium and clays in the bank south of Ely 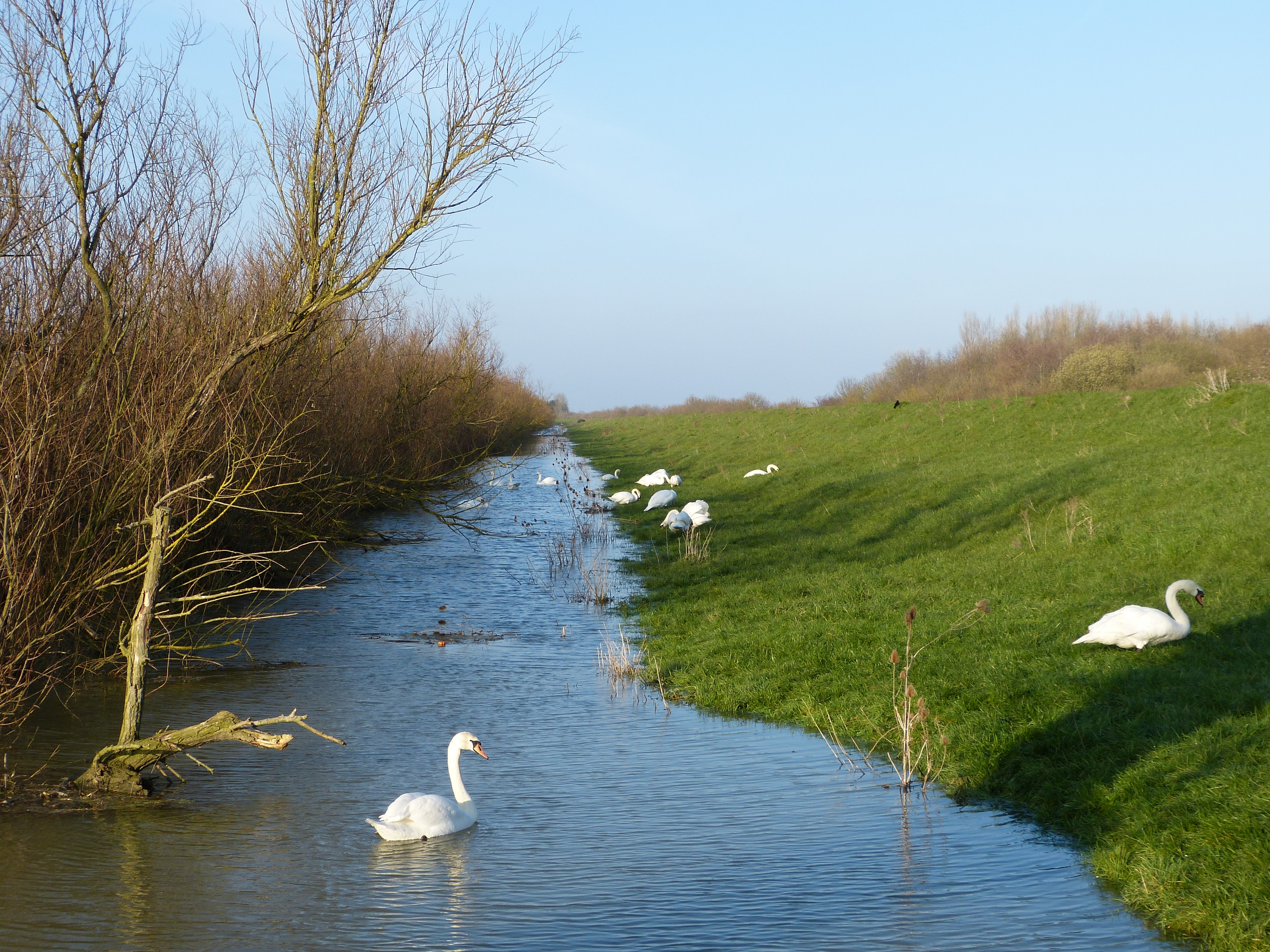 Mute Swans along the flooded bank near Over 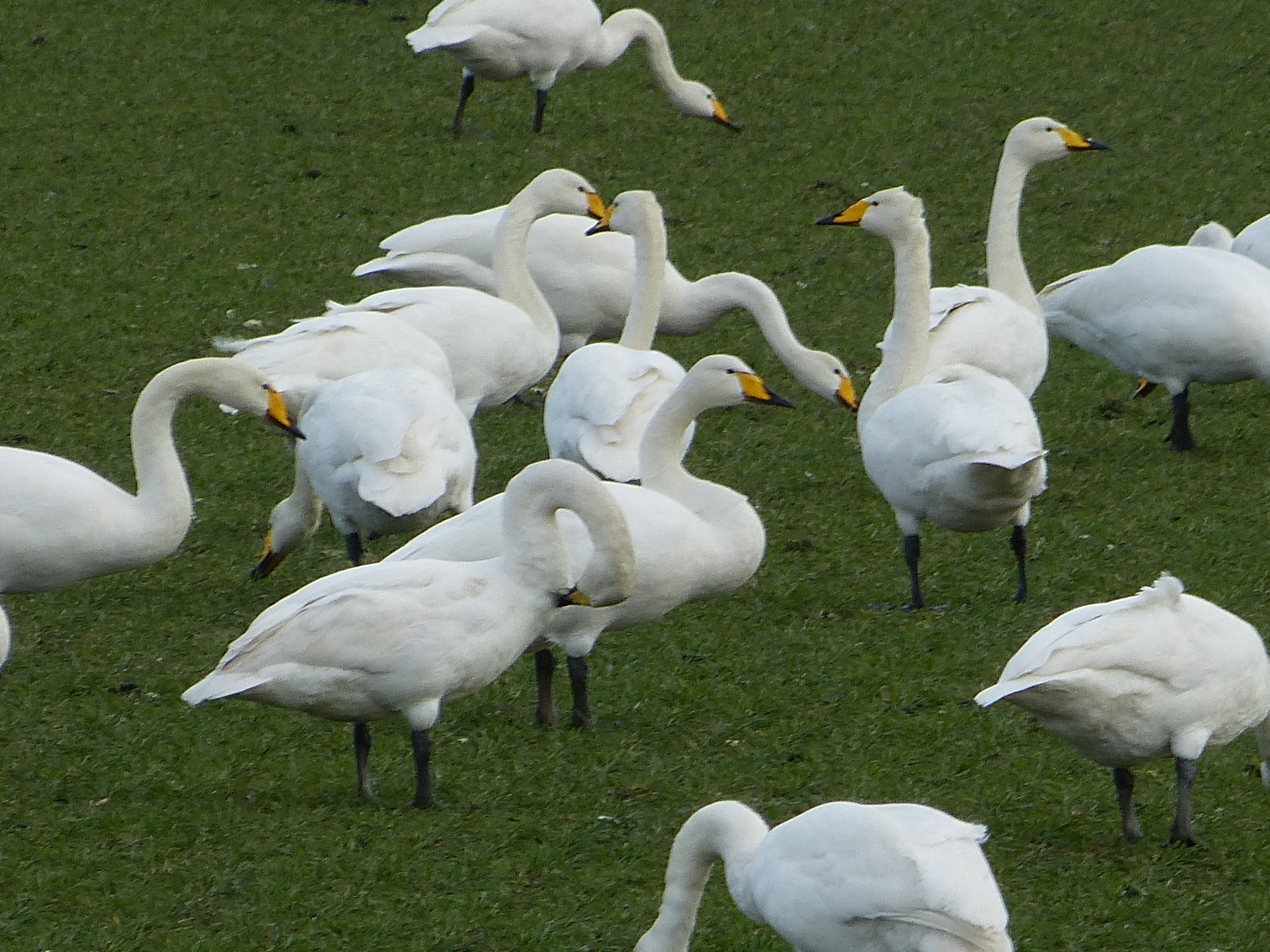 The Ouse Washes are an important wintering ground for Whooper Swans 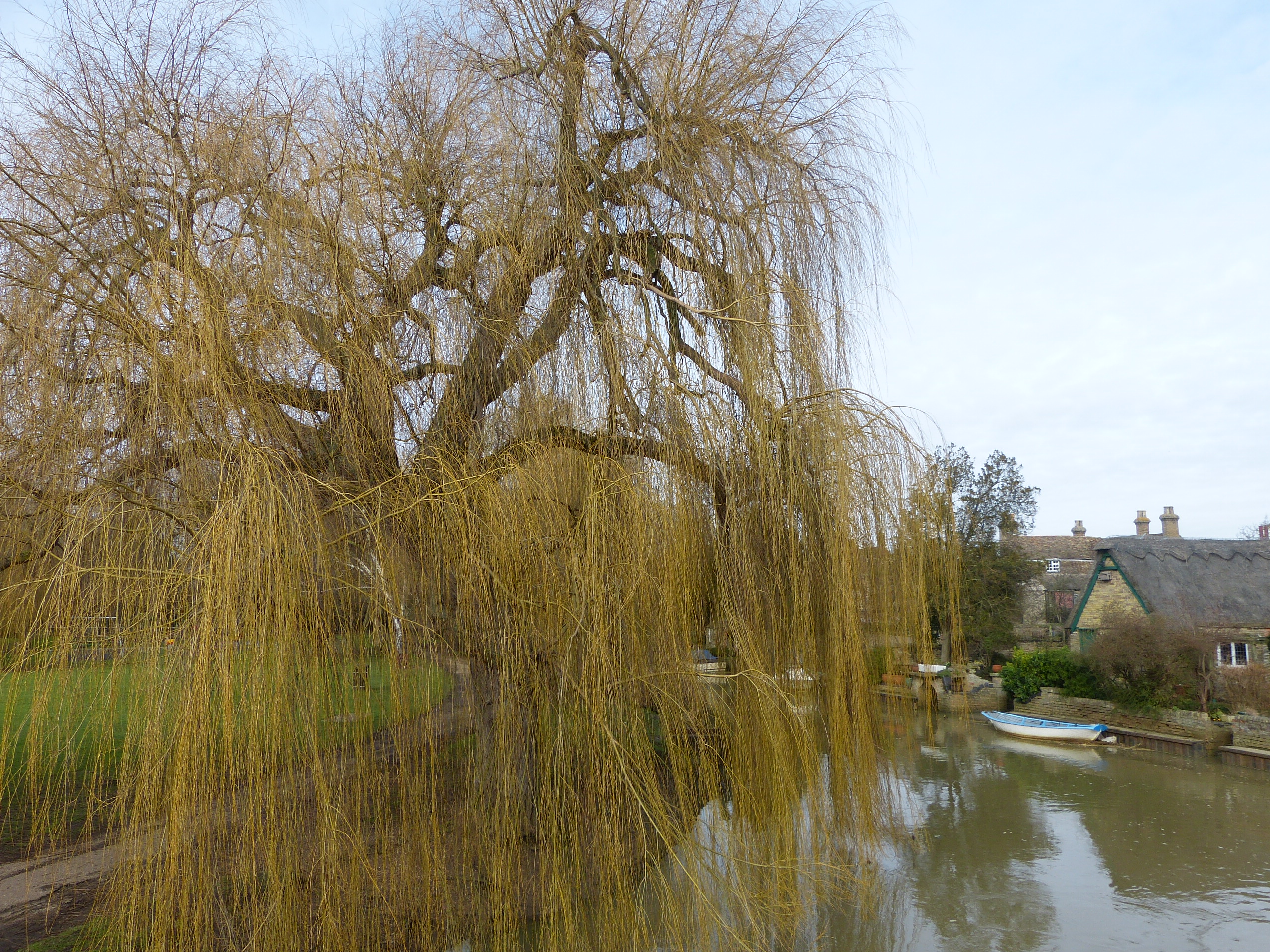 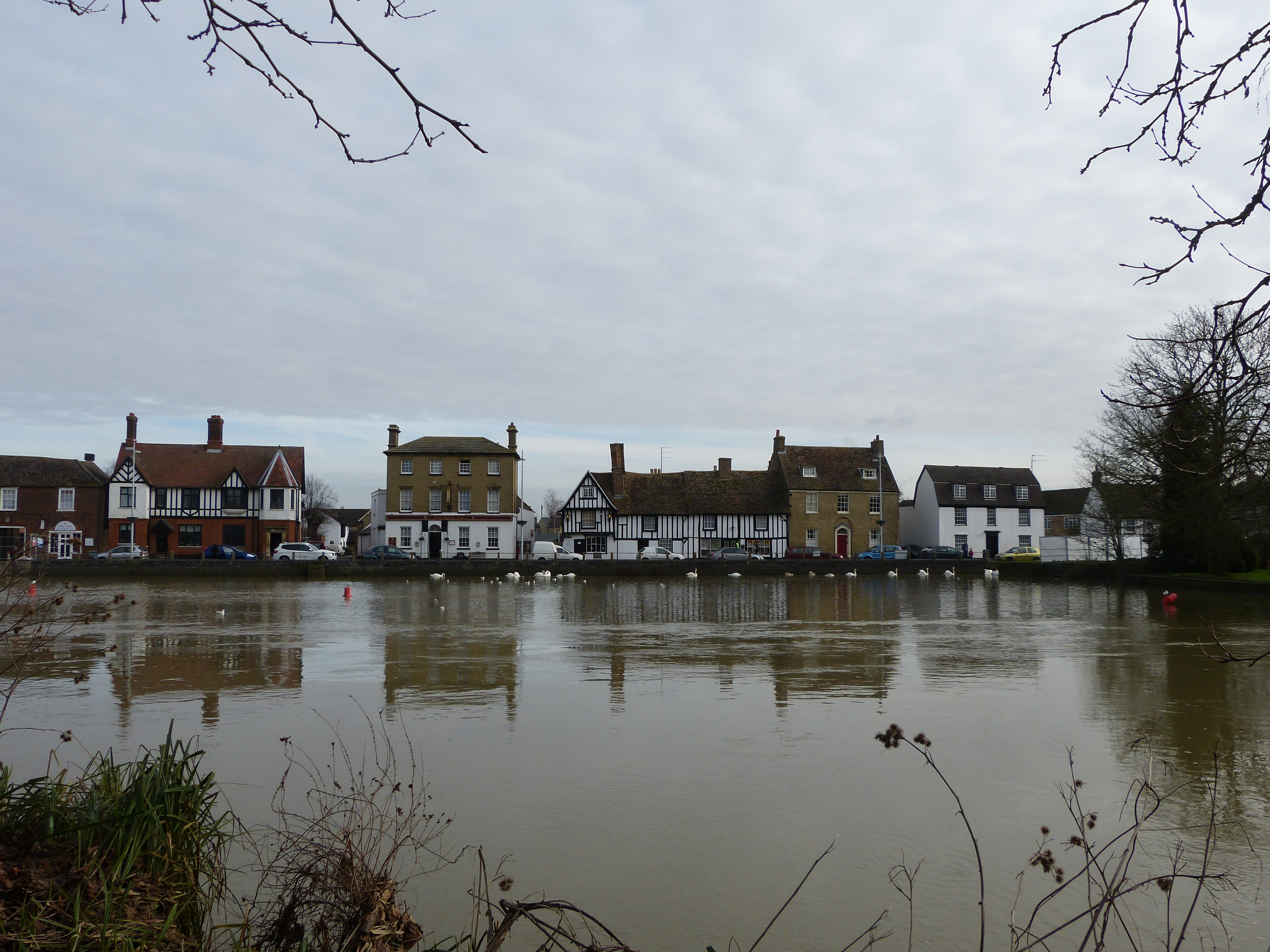 High water levels on the Ouse at Godmanchester 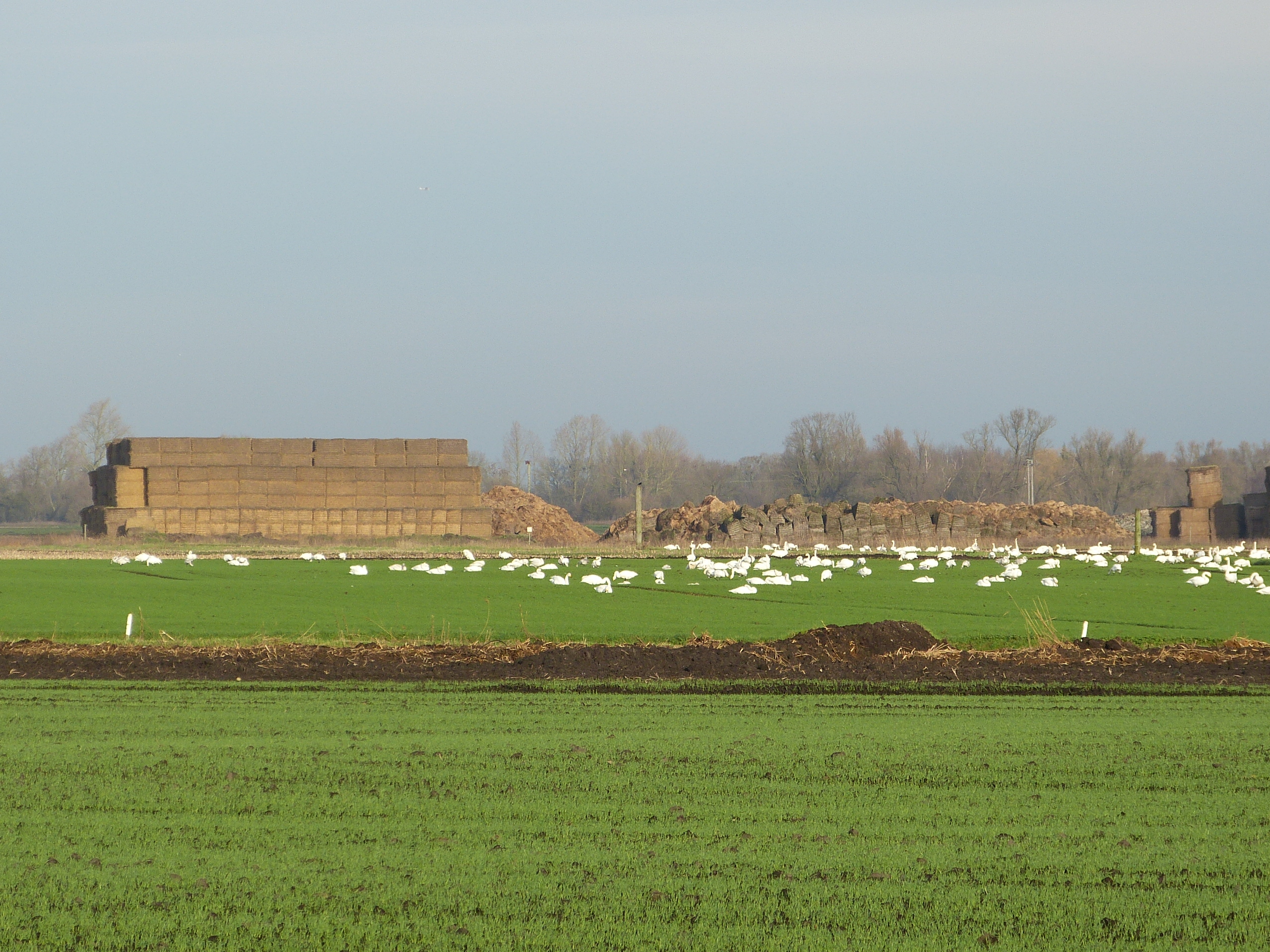 Whooper Swans on farmland near the Washes 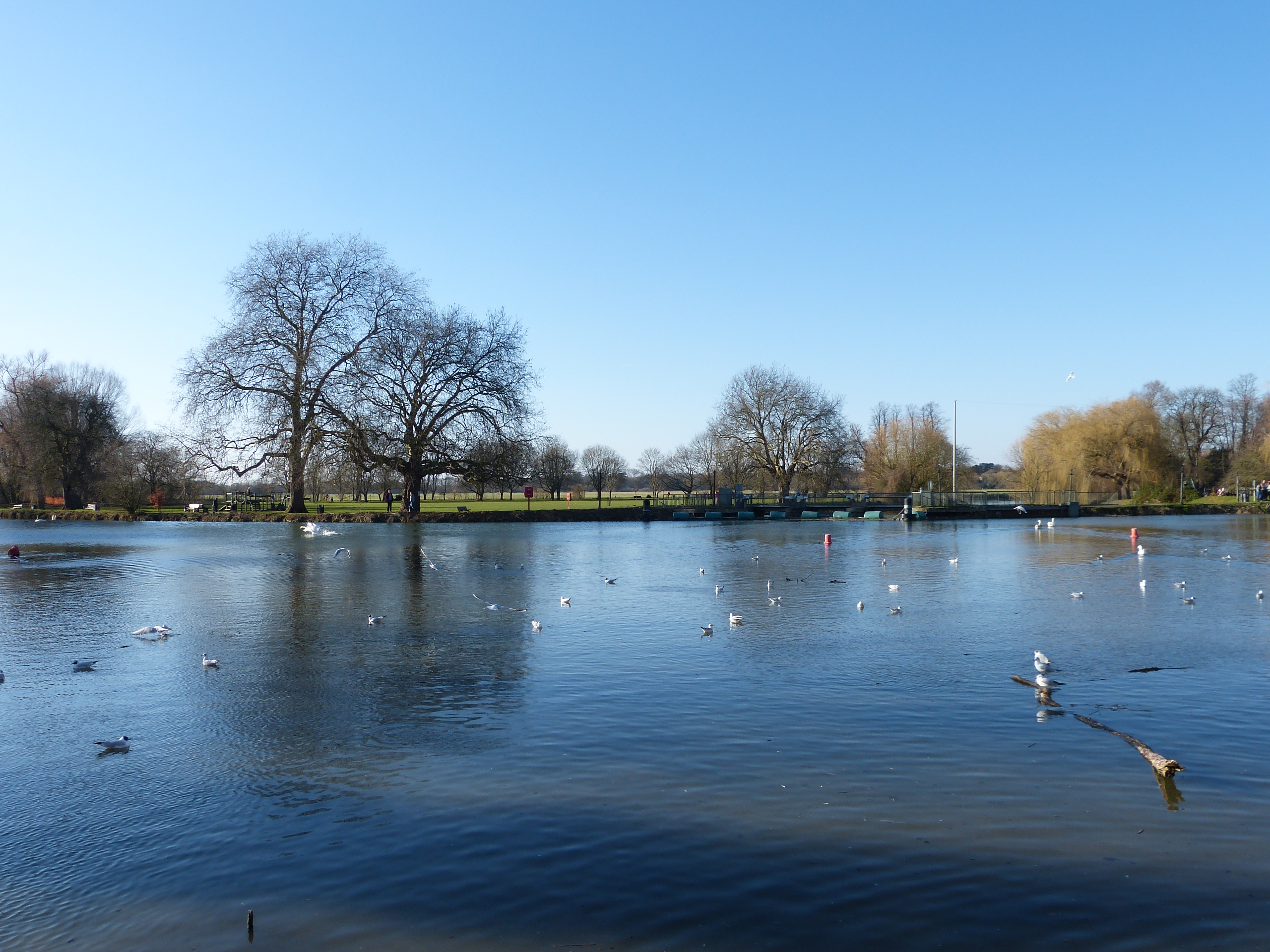 The Ouse at Godmanchester, with Portholme Meadow in background