Examples of some building stones used in Cambridgeshire’s historic buildings

Further afield, in the wider Cambridgeshire area, the diversity of the region’s building stones is also recognised, with several types of stone having been quarried both from within, and in the vicintiy of, the county. In addition to these there has been a significant supply of clay for the many brickworks and the use of many exotic stones found scattered over many of the county’s hills, mostly carried here by ice and deposited when the glaciers melted.

Below are examples of some of the main building stones in the county (by decreasing age):

Middle Jurassic: Limestones mainly from Middle Jurassic Lincolnshire Limestone to the northwest of Peterborough including the famous ‘Barnack Rag’.  The best quality Barnack Stone was worked out by around 1460, which led to the importation of a wide range of other stones, often from further afield. The bridge at St Ives is an example of this and is one of the only bridges in the country that has a chapel. Ely and Peterborough Cathedrals are also mostly made from Barnack Stone. 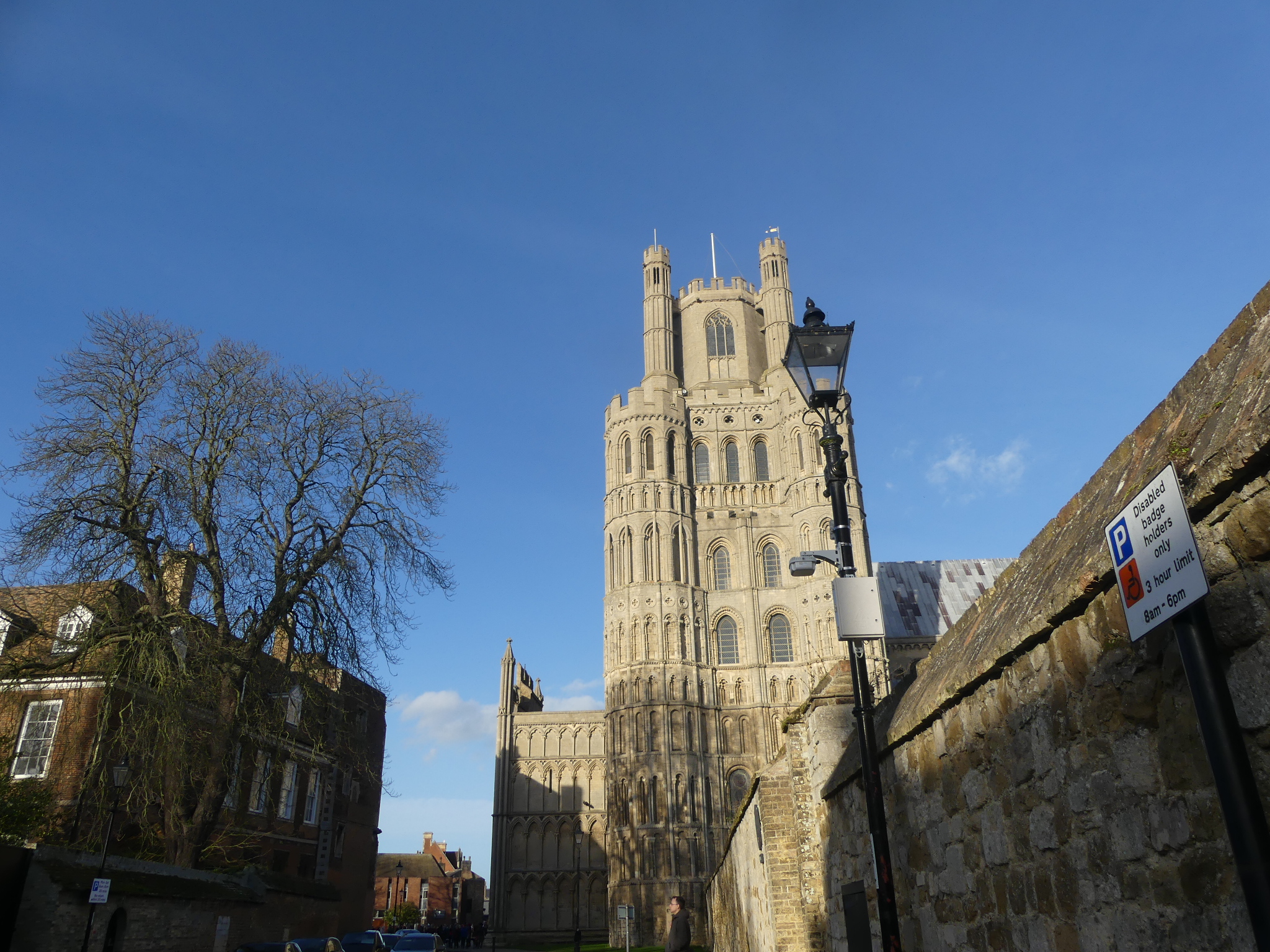 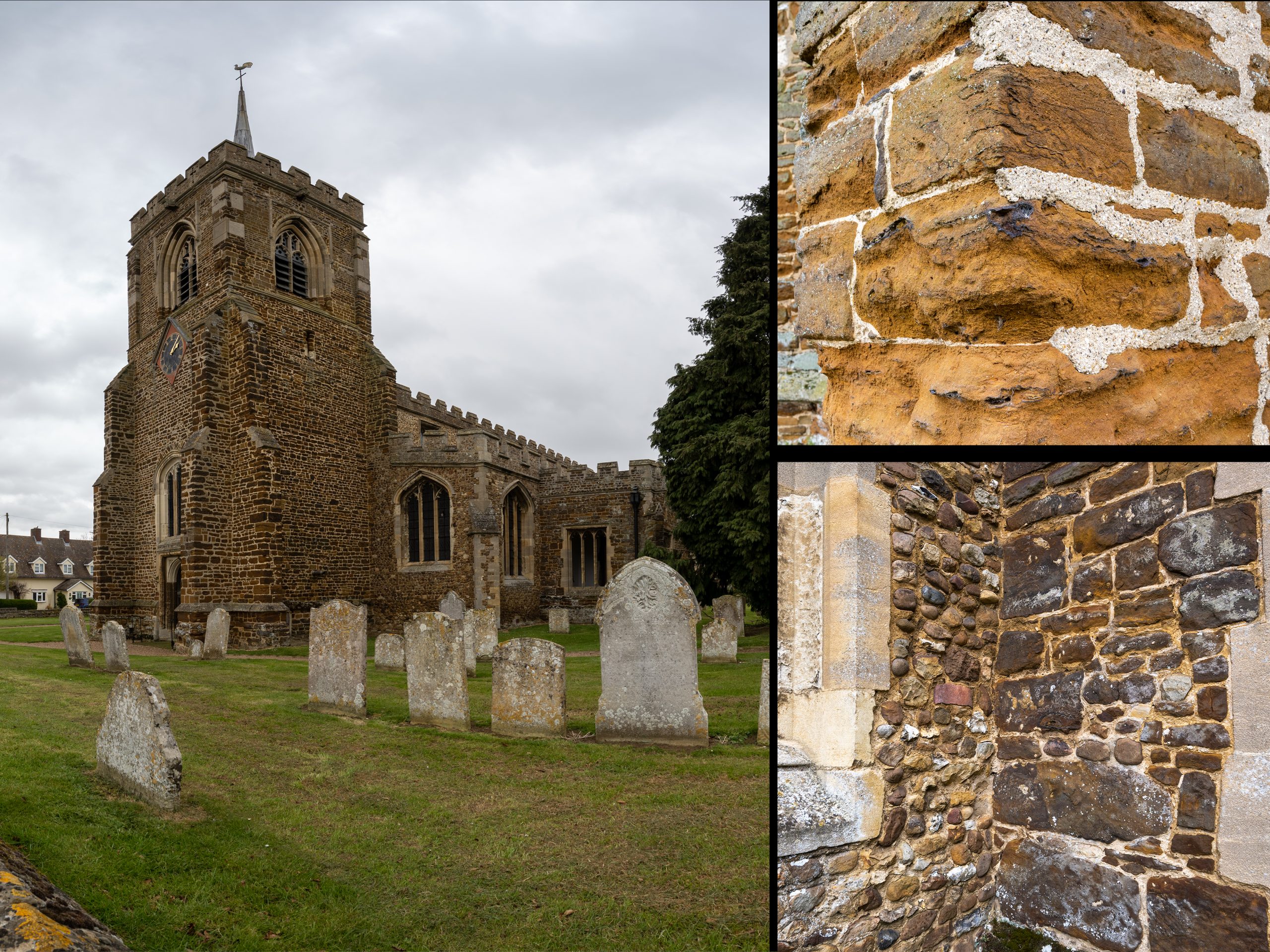 Lower Cretaceous: Sandstone from the Cretaceous Woburn Sands Formation (Lower Greensand) runs in a band north eastward from the south-west at Gamilingay, north past Cottenham and Ely. The C14th – C15th Church of St Mary at Gamlingay has been built using Albian Woburn Sands sandstone (with some Quaternary pebbles and cobbles and dressings of Chalk and Lincolnshire Limestone). Iron banding is evident in the quarried Woburn Sands. Walls around Ely Cathedral, which sits on a hill of Woburn Sands, also contain this sandstone. 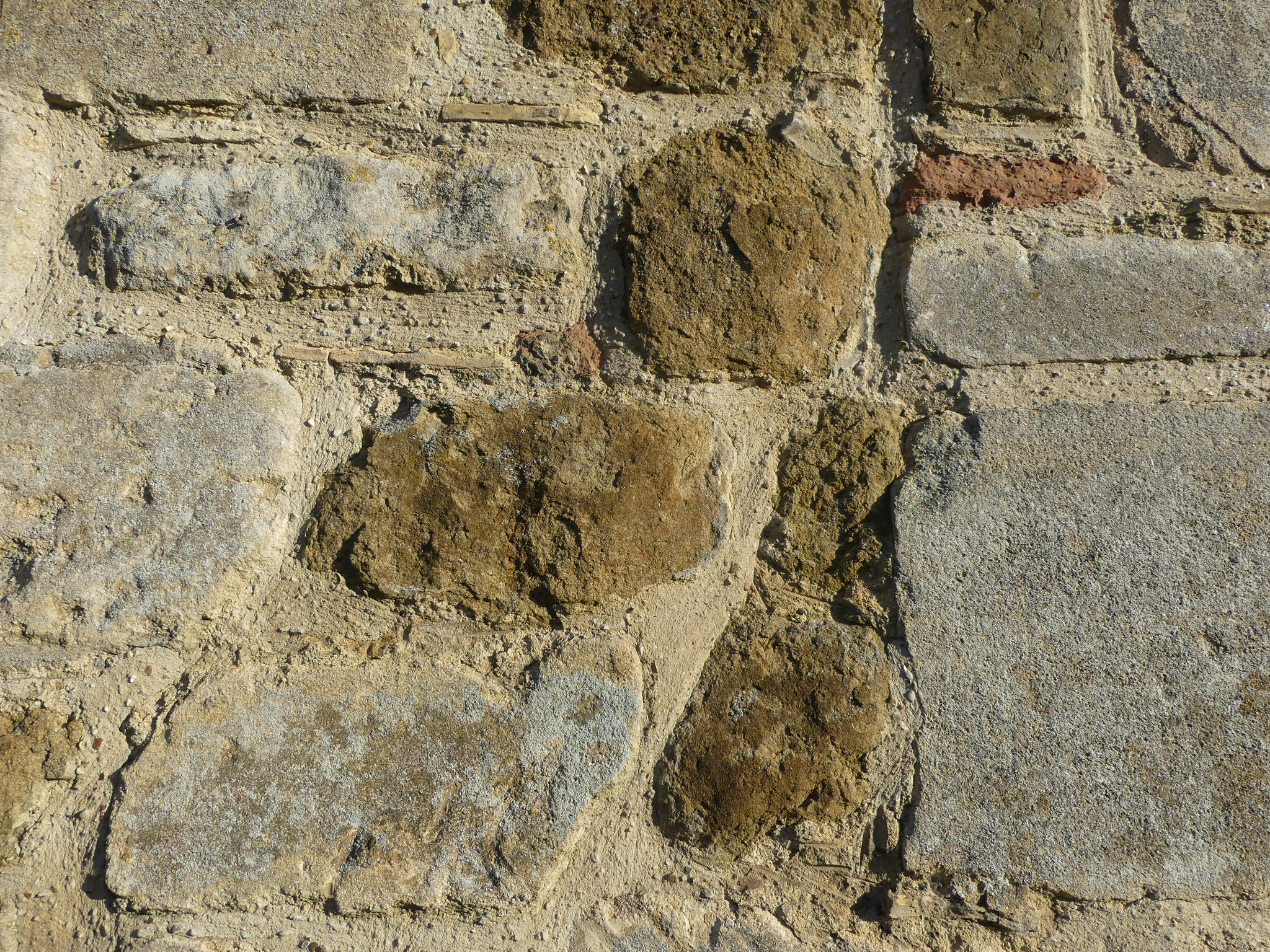 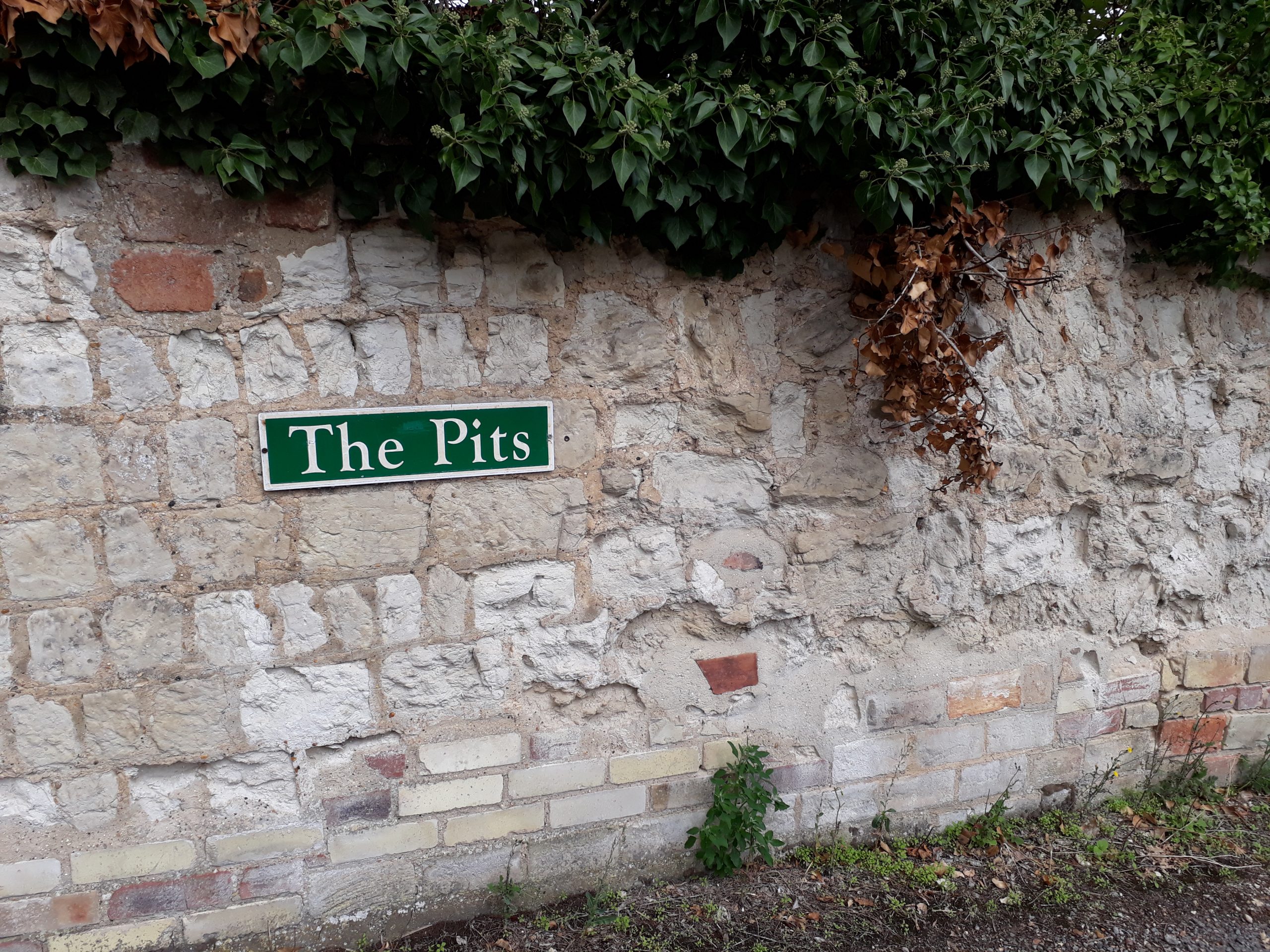 Upper Cretaceous: ‘Clunch’ and flints from the Cretaceous Chalk in the south east of the county provide a widely used resource for buildings and walls throughout the county. Whilst Chalk is generally unsuitable for use as a building material, the Totternhoe Stone member, a harder unit of Chalk within the Grey Chalk subgroup provides a widely used building stone. 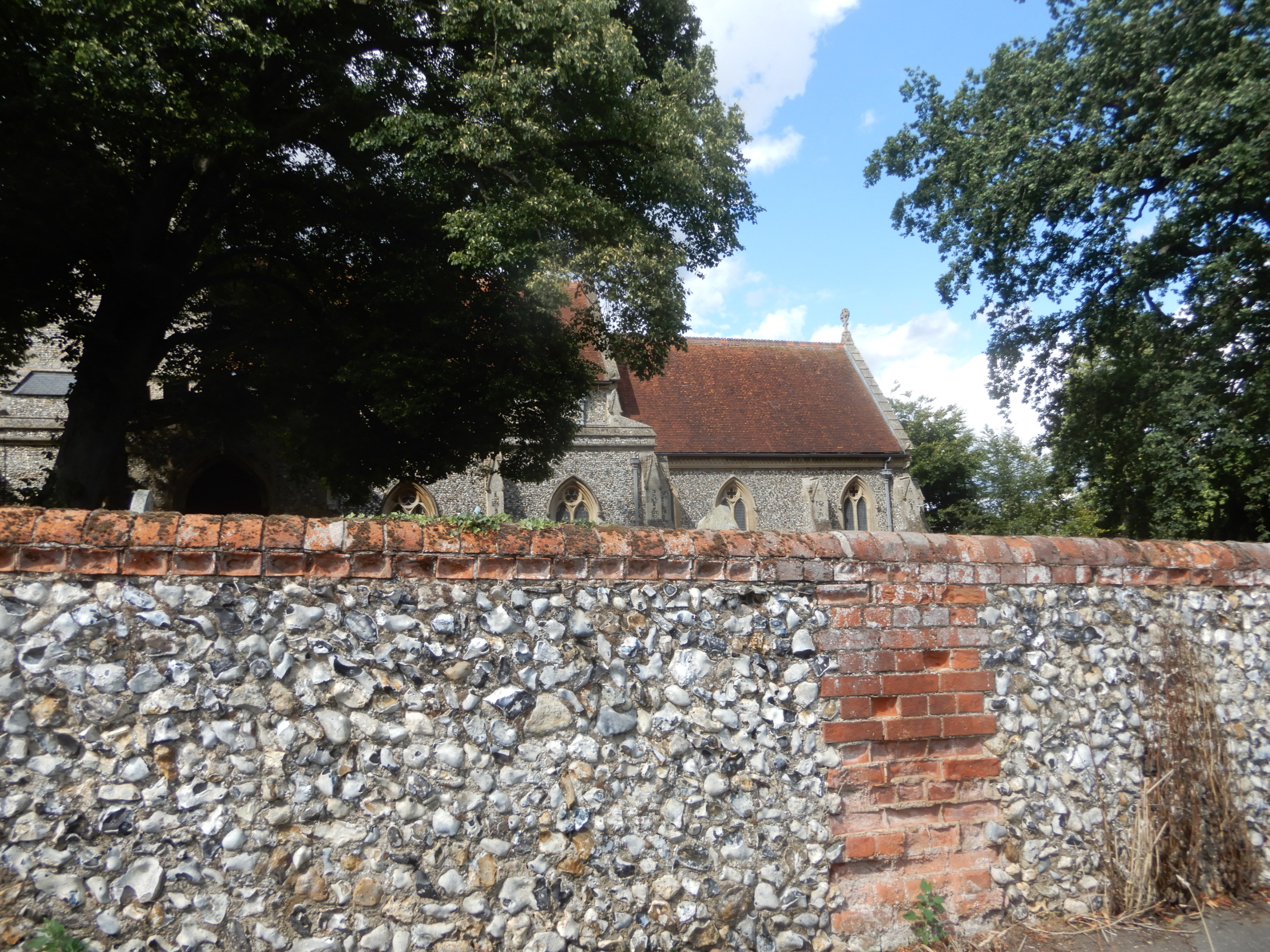 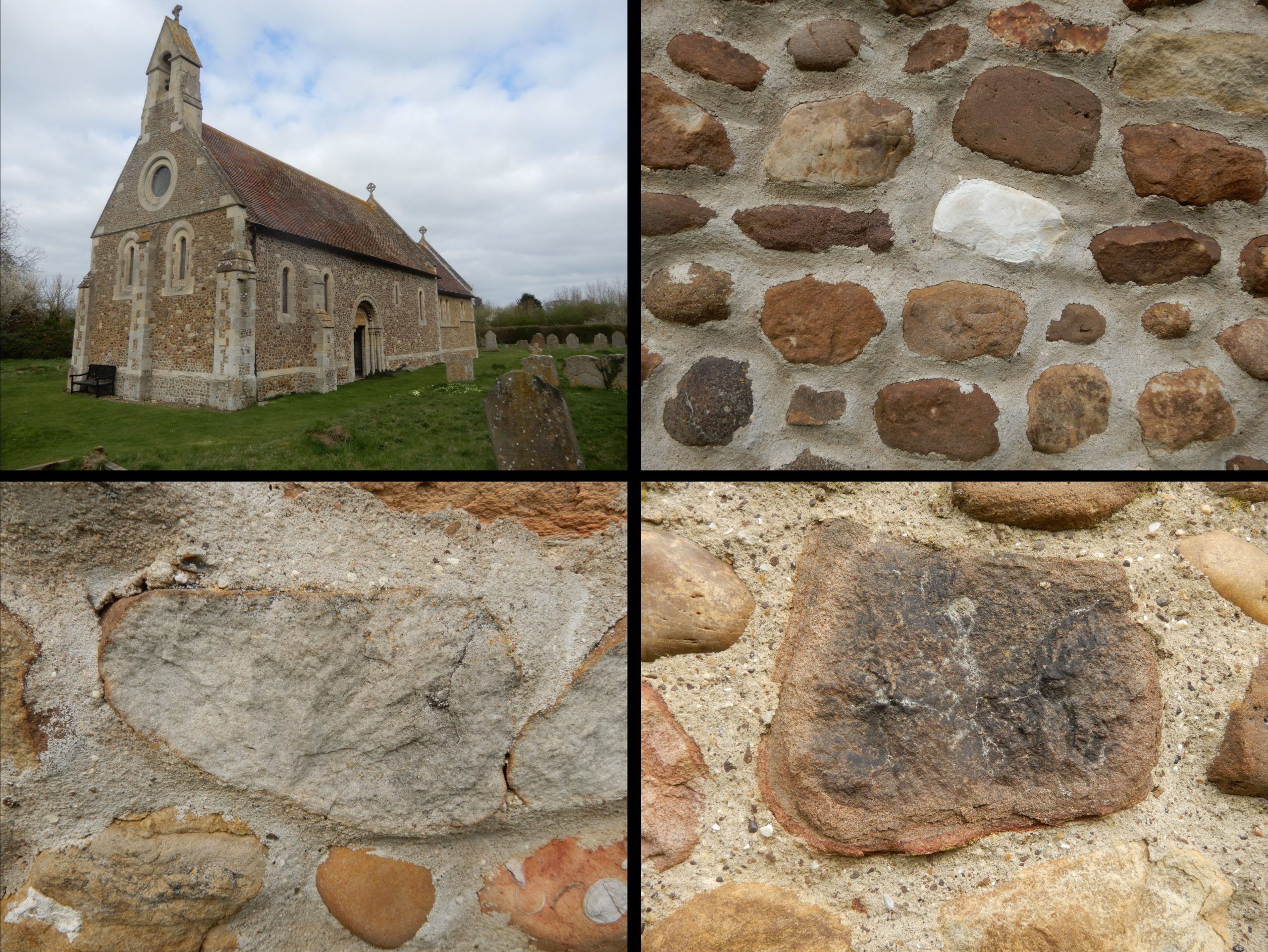 Quaternary: In Cambridgeshire, ‘Fieldstones’ are found in glacial tills and gravels left on the higher land of the county by glaciers or meltwater during the Anglian (and, to a lesser extent, Tottenhill) Glaciations. They comprise a mixture of various stones derived from both local sources and from much further afield. The C12th Church of St Michael at Toseland, which was restored in the C19th,  provides an example of Quaternary pebbles used as a building resource. 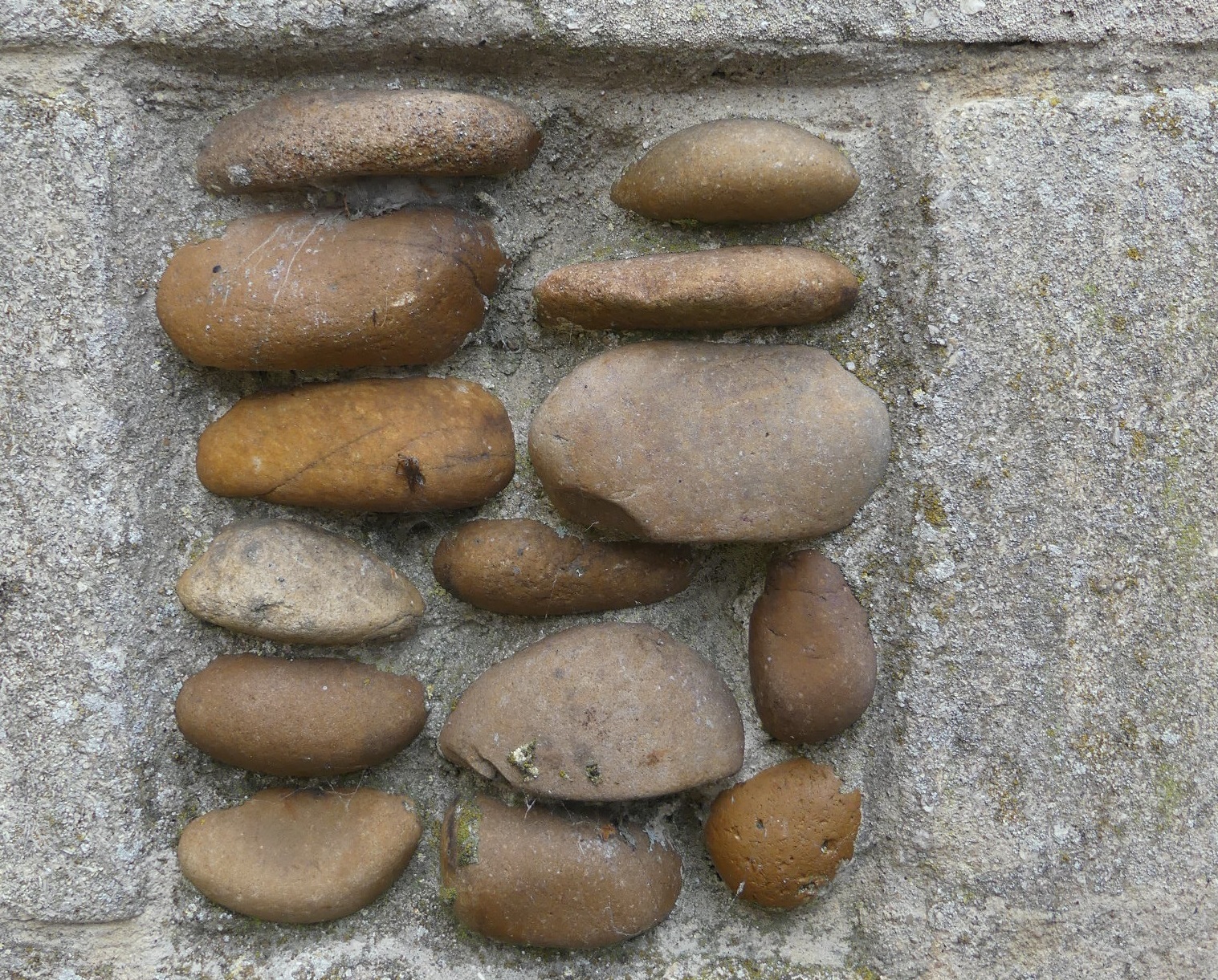 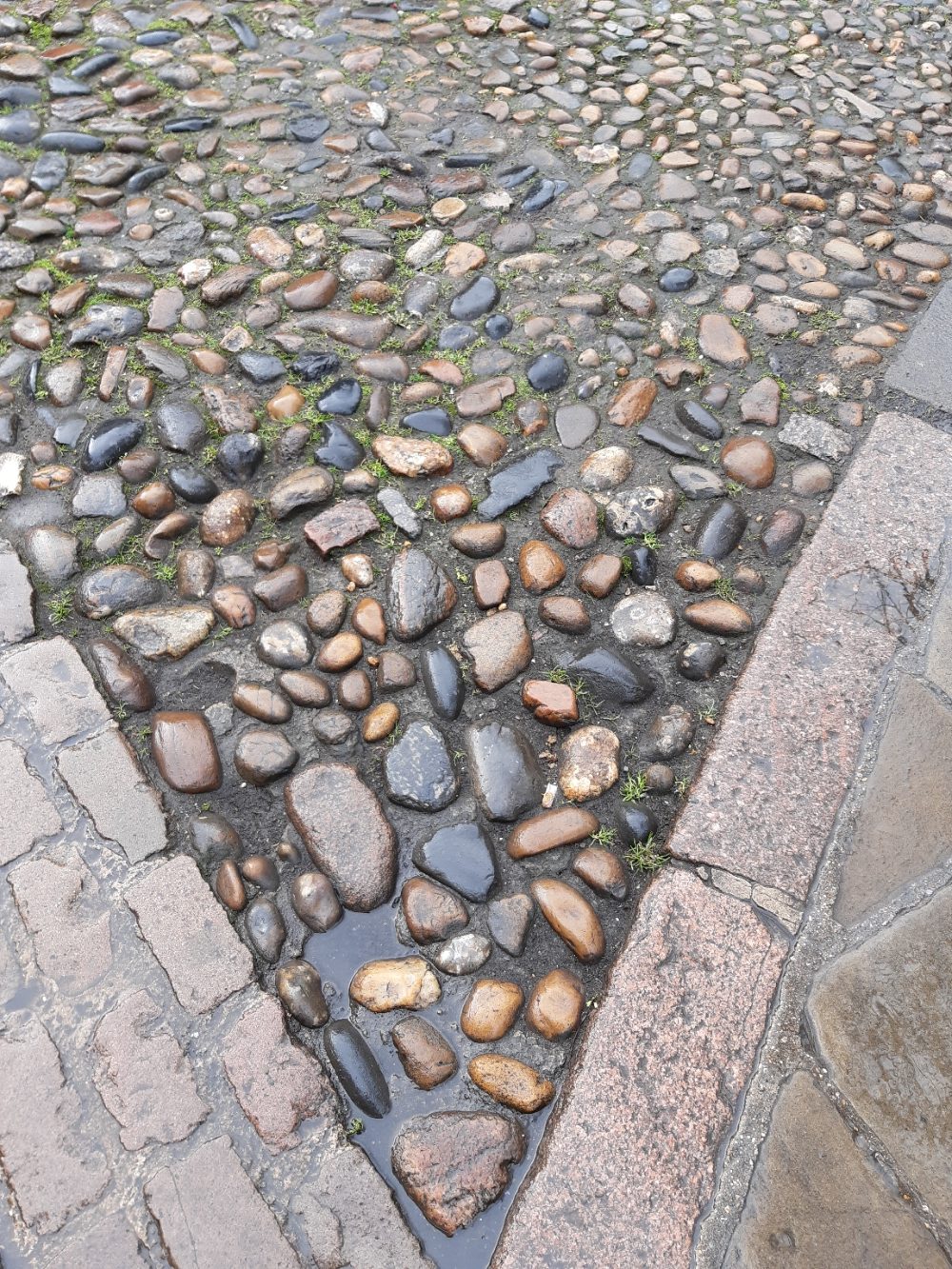 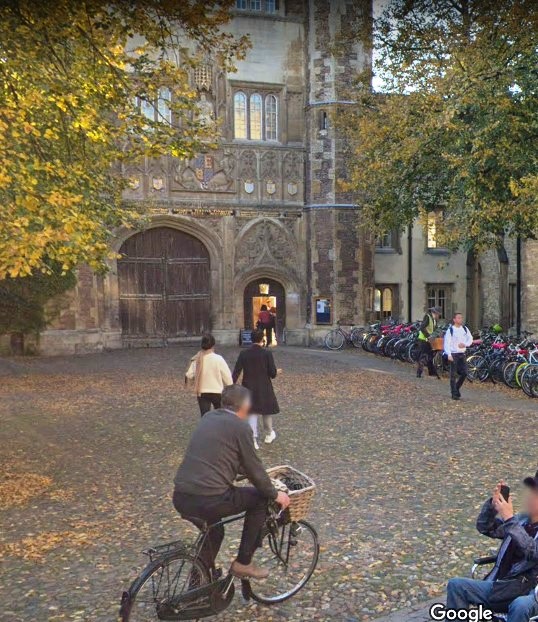 Quaternary: The cobbles used in the entrance to the Great Gate at Trinity College in Cambridge have been studied by Dr Marian Holness from the University. Collected locally, they were carried by glaciers to the Chalk hills to the south, such as Magog Down, from places as far away as Norway.

See the Great Gate Cobbles video describing the cobbles, their journey to Cambridgeshire and their history as building stones.

text and photos by Nigel Woodcock and Euan Furness

The geology of an area is often reflected in the materials used to construct its’ buildings. Recent studies in Cambridgeshire1, and in particular Cambridge2, demonstrate a remarkable millennium-long archive of building stone use which can be used to inform on the region’s geological past.

In pre-COVID times, the historic buildings in Cambridge were enjoyed by over eight million visitors each year, who learned something about their architecture but little about their geology. Recently, however, a comprehensive survey by Nigel Woodcock and Euan Furness from Cambridge University’s Department of Earth Sciences shows how stone use through time has been influenced by wars, by pandemics and by the canal and railway revolutions. The survey’s novel methodology will be useful for assessing heritage cities worldwide. Here, Nigel Woodcock explains more about the project:

The timing of our survey was very fortunate. Euan Furness did a pilot survey of some central colleges in summer 2017, then I did the full survey in summer 2019, little realising that the necessary access to colleges would soon be impossible due to COVID restrictions.

We recorded the external stone, in walls or as dressings, in every building in Cambridge except for private housing. For each historical building project, we identified the source quarry for the stone as far as possible, established the date of use from documentary evidence and assessed the volume of stone used. We amassed over 900 records of stone, even without recording roofing, paving or ornamental stone.

Our results show that over two-thirds of stone is from one of the nine quarry areas in the Lincolnshire Limestone Formation, which extends northwards from Corby through Stamford nearly to Lincoln. Most of the thirty or so other Cambridge stone types are also limestone, with only 6% being sandstone, flint and igneous rocks. It was particularly interesting to discover many new examples of stone from long-abandoned quarries, for instance Barnack, which was worked out by about 1460, and King’s Cliffe, last used in Cambridge in 1625.

The patterns of stone use through time show clearly how, until the nineteenth century, most stone was sourced from less than 100 kilometres from Cambridge, transported along the Fenland waterways. Exceptions are Dorset’s Portland limestone and Yorkshire’s Magnesian Limestone, both substantially transported by low-cost coastal boats. The use of most distant stone was only economic when canal links to southwest England were established in 1815 and when Cambridge was linked to the railway network from 1845. Both the volume and the variety of stone increased markedly during the nineteenth century and usage only declined after World War II.

As well as providing the basis for future popular guides to Cambridge stone, our work is a valuable database for architectural and transport historians. The novel methodology of our study should also be useful for assessing stone in other heritage cities worldwide. 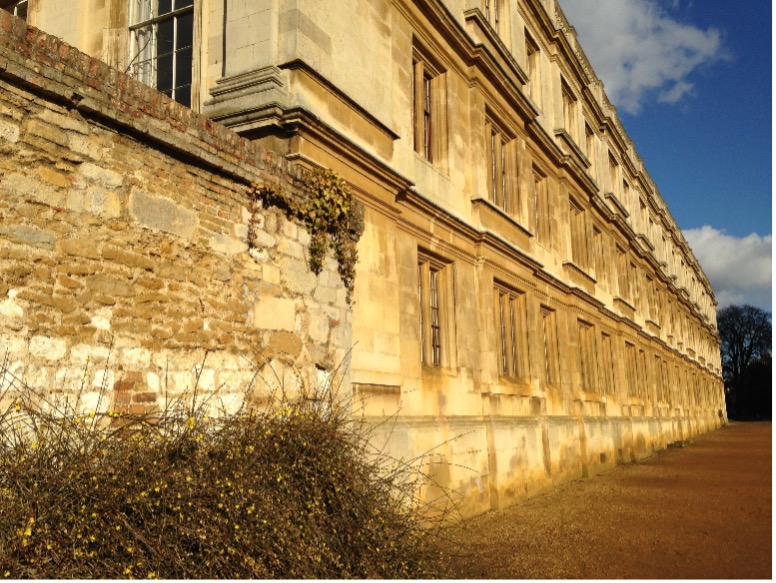 Middle Jurassic Ketton limestone from Lincolnshire has been used in the south range of Clare College Old Court. These Bajocian oolitic limestones have been used as a building stone since the C16th for many of the ancient buildings in the city and are named after the village of Ketton in Rutland.

Middle Jurassic: Cambridge’s most common building stone in close up: Middle Jurassic Ketton limestone from Rutland. Ooid grains are about 1mm in diameter. 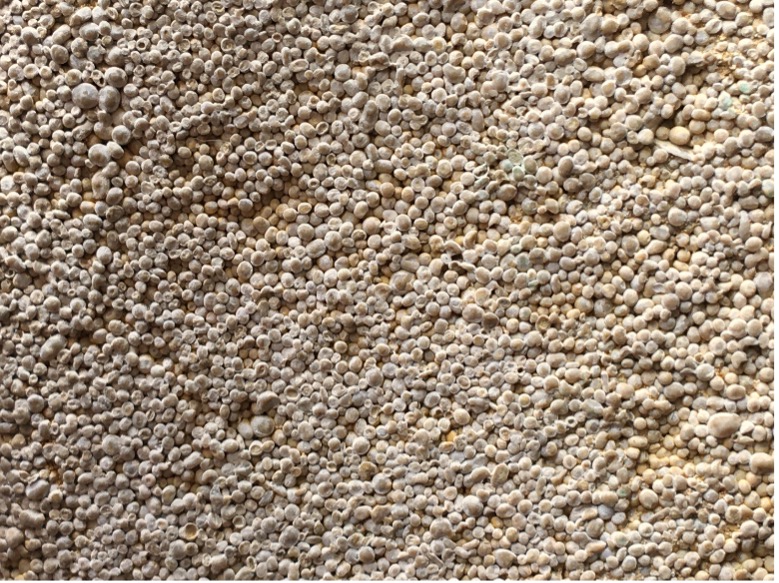 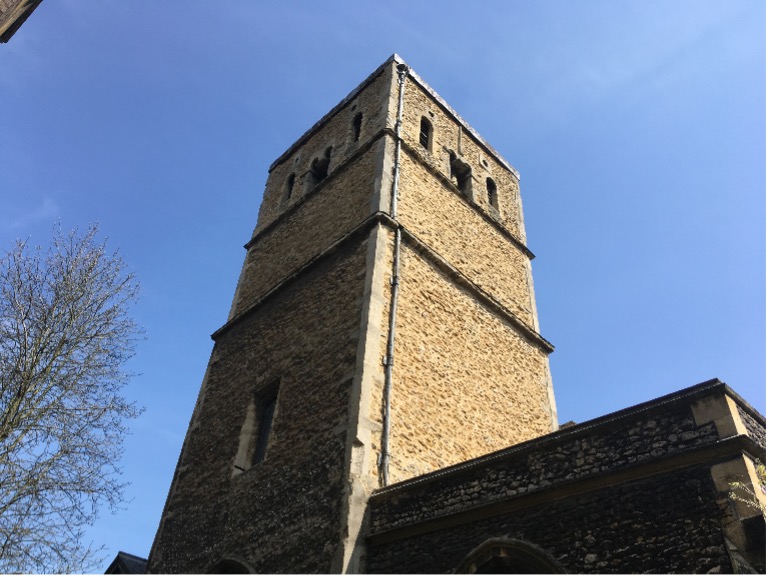 Middle Jurassic Barnack stones form part of the Lincolnshire Limestones which are all bioclastic ooidal-peloidal limestones of various shades of yellow and brown. Here, Ragstone rubble with Barnack dressings can be seen in St Bene’t’s Church tower. 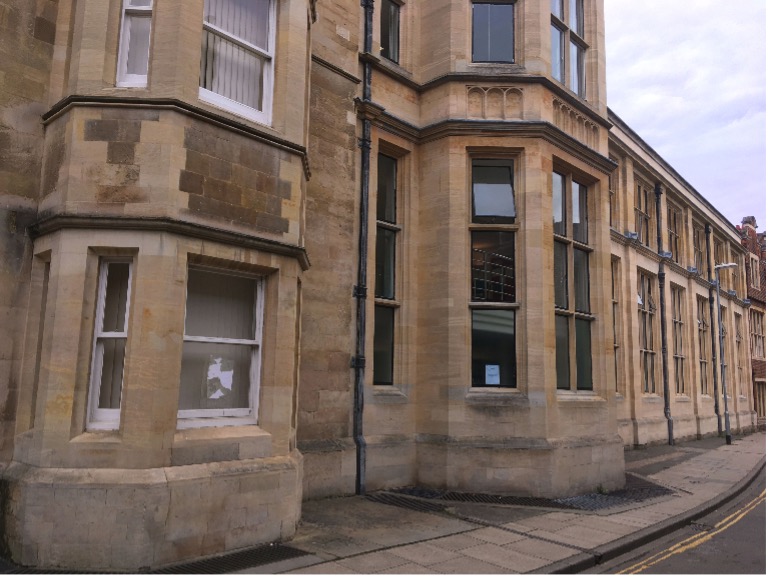