We have a programme of 10 talks running from September 2021 to June 2022, held on the second Monday of every month. All talks (unless specified otherwise) are at 7.30 pm (doors open 7.00 pm). Everyone welcome, free to CGS members, £3 for non members (free when on ZOOM although donations are welcome!).

Our programme for the Sep 2021 – June 2022 season consists of online talks (using ZOOM) that are free to watch and open to everyone (you just need to register, by contacting us to get the link. Once registered you will be sent the ZOOM link each month.

Talks are recorded but the recorded version is only available to members as part of their membership benefits.

The perhaps obscure science of palynology focuses on the study of microscopic specimens resistant to mineral acids. Yet, it contributes to our understanding of the natural environment, aids in correlation of boreholes and geological sections and charts past and current changes to our climate. This talk offers an overview of historical and modern palynological applications ranging from biostratigraphy to palaeo-ecology and its potential to constrain future climate models. Dr Hennissen has been a Palynologist for over 14 years. His title at BGS, Keyworth is ” Biostratigraphy and Palynology Lab Manager” and his current research is to evaluate the primary depositional conditions of Carboniferous mudstones. He graduated from Ghent and Liege Universities before achieving his PhD at the the University of Toronto.

This talk will describe the architecture of Holocene and earlier deposits in the Wicken Vision area, where the Lower Cam valley joins southern Fenland.  This area has two disparate sedimentary systems. The deposits are sometimes cryptic, and outcrops and topography are often mantled beneath an overgrowth of late Holocene peat. The Wicken Vision is a hundred-year scheme by the National Trust to create a new 53 km2 nature reserve between Cambridge and Wicken Fen. The area is characterised by its flat, low-lying topography and by soils developed on Holocene peat overlying clay-rich bedrock. However, such a simplistic description masks a wealth of geological complexity.

Dr Steve Boreham was formerly a researcher at University of Cambridge specialising in the Pleistocene and later sedimentation events in the wider Cambridgeshire area. In 2015 he created WildReach to provide information about Wildlife Resources around the village of Reach, Cambridgeshire. 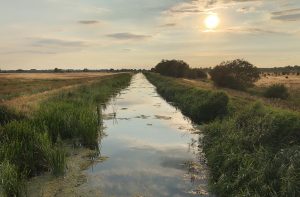 Malcolm Hart PhD DSc FGS CGeol CSci is Emeritus Professor in Micropalaeontology at the University of Plymouth, having ‘retired’ in 2010. Since 1965 he has been undertaking research on foraminifera and other groups of microfossils. Best known for his published work on the foraminiferal biostratigraphy of the Cretaceous he has recently been involved in a study of Jurassic coleoid fossils and the statoliths and arm hooks found in many Jurassic sediments. The Cretaceous work involved the site investigation and construction of the Channel Tunnel and Thames Barrier – both of which used foraminiferal biostratigraphy quite extensively.

In the University Plymouth he served as Head of Department of Geological Sciences for 10 years before becoming Pro Vice-Chancellor (Research & Innovation) of the University for 8 years and Associate Dean of Science (Research) for a further 6 years.

In recent years he has been awarded the Brady Medal by The Micropalaeontological Society (2019) and the Lamarck Medal by the European Geosciences Union (2011).

The Geology of the Chilterns and the impact of HS2

The Chiltern Hills are underlain by Chalk, predominantly what was traditionally called the Middle Chalk (now the lower part of the White Chalk Group) capped by the Top Rock – Chalk Rock complex. It is this series of chalk hardgrounds which effectively forms the spine of the Chiltern Escarpment. The Chalk dips gently into the London Basin, and the overlying basal Tertiary succession provides minor outliers around this northern rim of the basin. The other major geological event we have to recognise in this area is the re-routing of the Proto-Thames River during and following the Anglian glaciation, some 450,000 years ago. This created the landscape we currently see in much of the southern parts of the Chilterns. The planned route of the HS2 fast rail link passes straight across the Chilterns Area of Outstanding Natural Beauty (AONB) and the geology underlying this region needs to be considered carefully whilst tunnelling is being carried out; some concerns will be raised regarding the tunnelling proposed under the Chilterns, the geology it will encounter and it’s impact on the surrounding AONB. 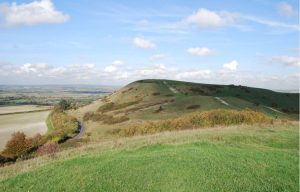 If possible please use the Hall car park otherwise please park in Coleridge Road or Hartington Grove towards Hills Road.

NB The Friends Meeting House is on the left if coming from the direction of Hills Road and on the right if coming from Cherry Hinton Road (opposite side to the marker shown on the map).

Friends of the Sedgwick Museum

The Friends organise a series of lectures in Cambridge (doors open, 6.15 pm for 7.00 pm in the Department of Earth Sciences)  during autumn and winter and field trips during the spring and summer. They also organise overseas field trip in the UK and overseass. More information.

CNHS organise a series of talks (winter) and excursions (all year). Talks are usually held at the Attenborough Building next to the Zoology Museum. Visitors welcome (small charge) More information.

Courses at the Institute of Continuing Education of University of Cambridge

The ICE holds many interesting courses, at Madingley Hall near Cambridge, including some on geology, local landscape, evolution and archaeology e.g.  Extinctions: crises in the history of life  with Peter Sheldon

Future Learn has a number of short, online courses on geological and related subjects. These courses are free and very easy to follow. Ideal for introductions to many subjects. Courses include Extreme Geological Events, developed by Cardiff University, The Earth in my pocket: an introduction to geology and Extinctions Past and Present.

There are a few local geology groups run by U3A: Cambridge    Peterborough

For details of many other talks and societies in the Cambridge area see the CONDUIT publication issued by the Cambridge Antiquarian Society. It gives contact details for the many organisations working to promote interest in history, particularly that of Cambridgeshire. The latest issue of CONDUIT can be downloaded from their website.