The Cam Valley in relation to the contours and geology. For a key to the geology see the British Geological Survey map viewer.

The River Cam flows from the south of the county towards the north, merging with the River Great Ouse at Pope’s Corner, two miles south of Ely. The various names used for the River Cam and its tributaries are confusing, with two different channels still referred to by the same name today. It used to be called the Granta in old English, hence the village Grantchester and the previous name of Cambridge as Grantebrycge. When the city changed its name to Cambridge, the name of the lower reaches of the river changed to match.

The lower (northern) part of the river is now called the Cam up to Hauxton Junction (1 mile/1.5 km south of Granchester). At Hauxton Junction the two main tributaries meet. The first, referred to as the Cam by the Environment Agency and National Rivers Authority, but often referred to by many local people as the Granta, rises south of Debden (112 m/ 367 ft altitude) near Widdington in Essex. The second is the Rhee, which rises at Ashwell springs (49 m/161 ft altitude) in Hertfordshire. The EA and NRA reserve the name Granta  for the third main branch that rises south of Castle Camps in the far south east of Cambridgeshire and joins the Cam near the Shelfords, southeast of Hauxton Junction. We are including the valleys formed by all three of these watercourses in our ‘Cam Valley’ as well as their tributaries such as the Bourn Brook and Hobson’s Brook. Together, they make up a significant landscape feature in the south of the county.

The Cam Valley has four landscapes associated with it:

Landscape 1 is the fenland section from Popes Corner, south of Ely, to Cambridge where the river flows over the low-lying Fens. The river at Cambridge is of particular historic interest, being a river crossing point since early times due to its location on the southern edge of what would have been extensive marshes for thousands of years. It is overlooked, at Magdalene Bridge, by Castle Hill, with its Norman earth castle mound, and, a little further south, runs through the world-famous college ‘Backs’ with the famous view across the water to King’s College Chapel.

Landscape 2 is the ‘Cambridge Gap’ from Cambridge to Hauxton Junction about 1.5 km /1 m south of Grantchester. The Gog Magog Hills, to the east of the gap, rise to 68 m above the river whilst the ridge to the west on which lie Madingley Wood and the American Cemetery, rises to 54 m above the river.

Landscape 3 is the River Rhee which rises at Ashwell in Hertfordshire and flows via Barrington to Hauxton Junction. The source is Ashwell spring, one of the ecologically valuable ‘chalk springs’ found in the area that still contain a particular species of flatworm which which has survived from colder times – the current, characteristic, temperature of the spring water emerging from the Chalk is 10.4C  which is cool enough for it. This wide shallow valley is low lying, with the settlements and roads surrounding it built away from the river on higher ground.

Landscape 4 is the upper part of the River Cam which rises near Debden in the chalk hills of Essex and flows via Great Chesterford to Hauxton Junction. The settlements tend to be near the river and in the steep sided valley bottom. The valley is an important north south road and rail route, with the M11 motorway following the western edge of the valley.

While most of Cambridgeshire is underlain by mid and late Jurassic bedrock, the south east part of the county is underlain by strips of younger Cretaceous bedrock (in order or decreasing age):-

The later three occur in the Cam Valley whilst the first occurs to the north west. The landscape we see today was extensively modified by the Anglian Glaciation, ending c.425,000 years ago when ice covered the whole county, and by subsequent cold periglacial periods. The Tottenhill Glaciation c.160,000 years ago also modified the lower Cam Valley in the Fen Basin as a tongue of ice extended south nearly as far as Cambridge.

The Cam Valley has a dynamic landscape history and this has left a legacy of a complex pattern of river terraces and glacial deposits. At present, four Cam River Terraces have been identified (with some research suggesting the gravel deposits known generally as ‘the Observatory Gravels’, in the north west of Cambridge, represent a 5th). The terraces formed at different times as the river changed its course and, therefore, represent stages in the development of the valley. Each terrace contains deposits of various ages whose relationship to each other are often complex. Occasionally, material has been reworked from earlier deposits making dating difficult in some places. Individual deposits have been named according to a key area where they have been found e.g. Huntingdon Road Member (4th Terrace), Histon Road Member (3rd Terrace), Sidgwick Road Member (2nd Terrace) and Barnwell Station Road Member (1st Terrace).

The Cam Valley is bounded to the northwest by the Western Plateau and to the southeast by the Chalk Uplands, both covered extensively by Glacial deposits.

The Cam is navigable by normal river traffic from the Ouse up to Jesus Lock north of Cambridge. Punts and canoes can reach further upstream to Grantchester and Byron’s Pool. The stretch between Jesus Lock and Bates Bite Lock is used for rowing and the unique Cambridge Bumps races are held here every year.

Many springs occur in the area, notable ones being at Ashwell in Hertfordshire and Fowlmere, Nine Wells and Cherry Hinton (Giant’s Grave) in Cambridgeshire. Nine Wells is an example of a Chalk spring which feeds into the River Cam. It is the source of Hobson’s Brook which was converted into Hobson’s Conduit, an important water resource for the people of Cambridge. Its ecology has been studied in the past and there are now efforts to restore some of its value. It is a Local Nature Reserve and a Local Geological Site. Giant’s Grave (a candidate Local Geological Site) is the source of Cherry Hinton Brook.

There are also chalk springs along the south east fen edge, to the east of the Cam Valley. Castle Spring at Burwell is a Local Geological Site due to its chalk spring. CGS, in partnership with other members of the County Sites Panel including the Wildlife Trust, are currently researching the chalk streams in the county and identifying the springs that give rise to them.

For more about chalk springs and streams see the Hertfordshire Geological Society website and the The Wildlife Trust’s website.

Other springs and streams

The Bourn Brook, rises in the higher land of the Western Plateau and joins the Cam at Byron’s Pool LNR. It is fed by a number of springs, several of which arise from water that percolates down through the Woburn Sands until it reaches an impermeable layer of clay (the Kimmeridge or Gault clays). It plays an important role in the area’s biodiversity and is particularly important for water voles. 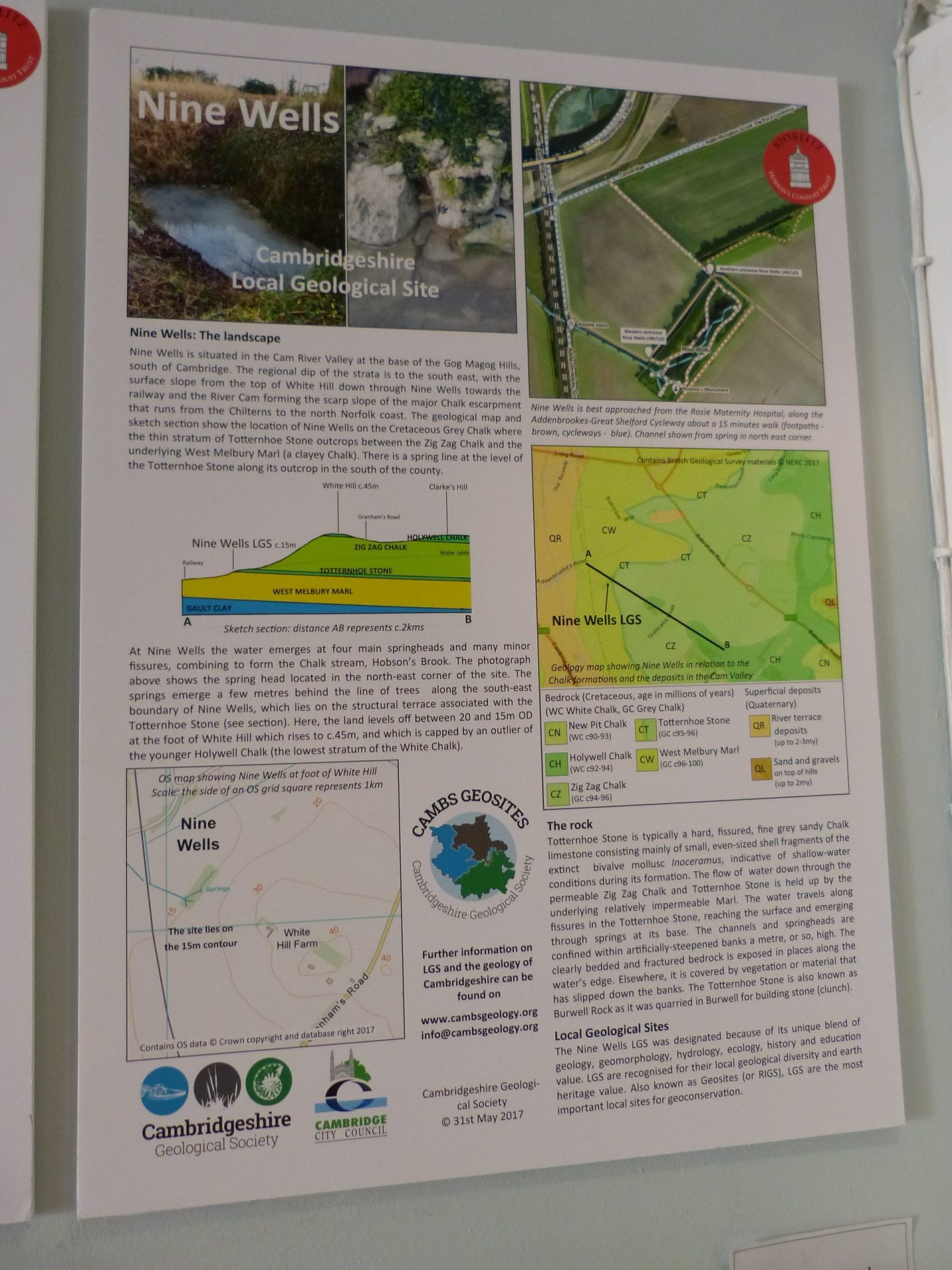 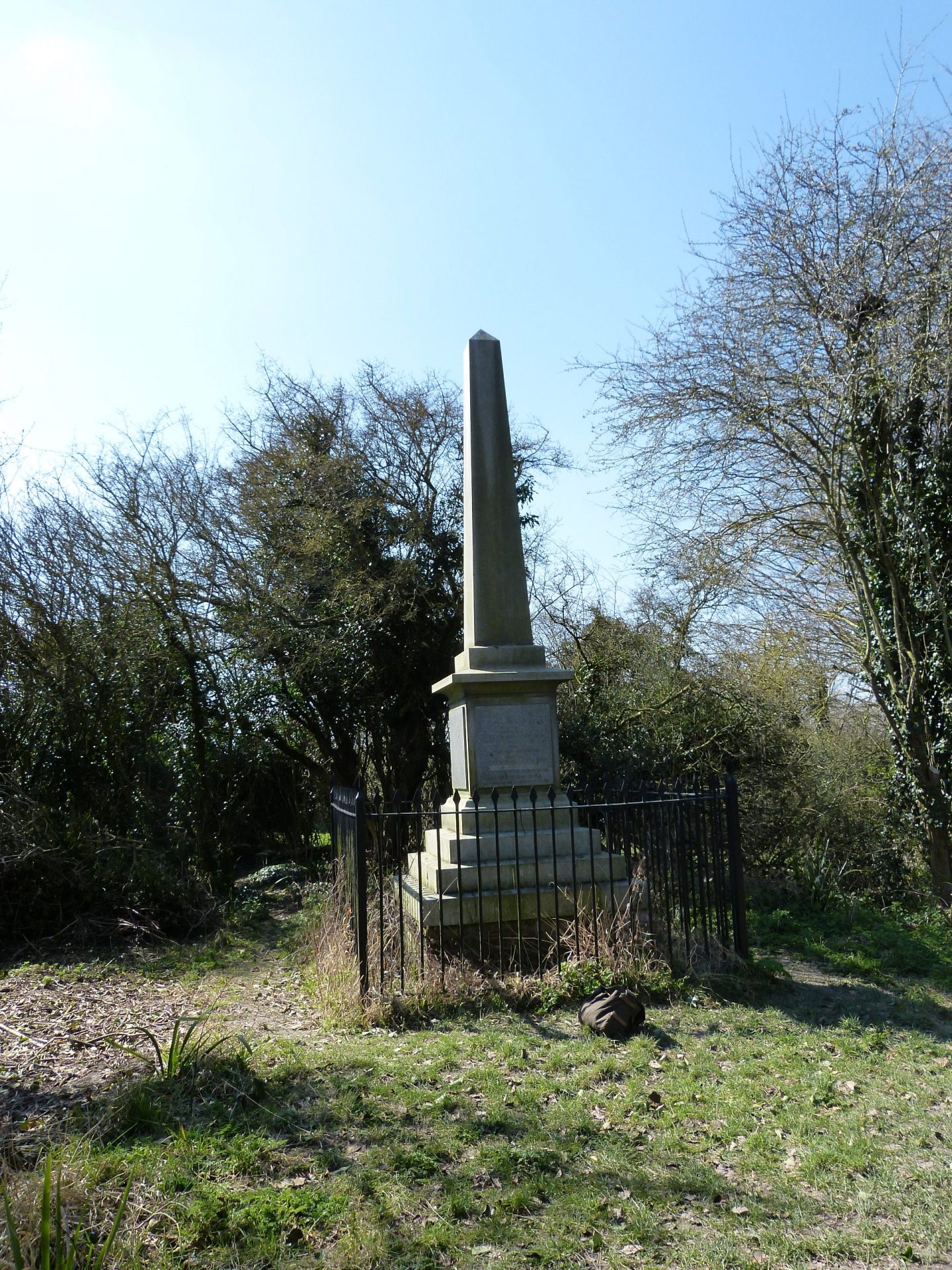