We have a programme of 10 talks running from September to June, held on the second Monday of every month. All talks (unless specified otherwise) are at 7.30 pm (doors open 7.00 pm). Everyone welcome, free to CGS members, £3 for non members.

Our programme for the Sep 2020 – June 2021 season will start on Monday 14th September 2020 with an online talk (using Zoom) that is free to watch and open to everyone (you just need to register to get the link).

The monthly talks from September onwards will be by Zoom for the time being and details will be announced when they are confirmed – contact us to be notified of their details.

Dr Daniel Field is a Lecturer in evolutionary palaeobiology in the Department of Earth Sciences at Cambridge, and a Fellow of Christ’s College. He also holds a UK Research and Innovation Future Leaders Fellowship. Originally from Canada, Daniel obtained his PhD from Yale University, and his research focuses on using the fossil record to understand how modern bird diversity and biology came to be.

“An asteroid impact 66 million years ago may have wiped out the giant dinosaurs, but it also resulted in the rapid diversification of birds. From this point onwards, avian evolutionary history was changed forever, eventually giving rise to nearly 11,000 living species. Daniel Field explores the evidence for the early evolution of modern birds, and sheds light on how, when, and where modern bird diversity arose.” 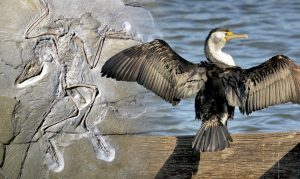 Join us for a lighthearted evening of testing your Cambridgeshire geology knowledge! This virtual quiz is open to members only as the event will be interactive, so we do have to restrict numbers. Any number in one member’s household can form a team.

Brazil is a land of huge geographical variability – the largest rainforests and wetlands on earth contrasting with extensive area of dry savannah; coastal cliffs and pancake-flat interior plateaux; and dynamic erosion in some places and 400 million year-old surfaces in others.  This variability will be explored and explained by focusing on two areas of active research: the coastal escarpment around Rio de Janeiro and the Parnaíba Basin of NE Brazil.  The escarpment is an area of controversy – does it date from the Cretaceous opening of the Atlantic Ocean or is it a relatively young feature?  Whichever theory is correct, it is a striking bit of topography – the backdrop to the tourist views of this wonderful country and home to some of the most terrifying roads in the world.

The Silurian–Jurassic Parnaíba Basin in NE Brazil is equally enigmatic – it is an intracratonic basin, with a huge lateral extent and a relatively thin fill.  This class of basin is best-known from North America, where the Williston, Illinois and Michigan basins have been extensively studied.  Published stratigraphic compilations from intracratonic basins emphasise basin-wide unconformities separating layer-cake packages; this idea is demonstrably wrong, but evidence does support an interpretation of very slow subsidence.  This talk will describe the geology of Parnaíba and demonstrate that the interior of Brazil was the site of huge continent-spanning rivers and extensive lake systems that reached into what is now west Africa.

‘The relationship between life and sedimentary environments‘

This talk will look at the influence life forms had on the creation and development of sedimentary environments from the Precambrian to the Triassic. We will see how life influenced sedimentation patterns and so created new habitats for evolving organisms.

‘The Making of the Mendip Hills‘

‘Somerset is a unique county with more geological periods present than any other English County. The city of Wells is well known as England’s smallest city but within its immediate backdrop the rocks record a longer geological history than any other English city – a 200 million year (Devonian to Jurassic), 6,000 km journey from the southern tropics across the equator into northern latitudes.’

Dr Doug Robinson is a research fellow at Bristol University Dept of Earth Sciences, now retired. His research is in the field of very low-grade metamorphism, and aims to establish if geochemical and mineralogical changes at low temperatures – in the range 100- 300°C – can be understood in terms of equilibrium order and/or kinetically-controlled reaction progress.

‘On 29 May 2006, a mud volcano erupted in the Sidoarjo regency of East Java, Indonesia.  Unlike other mud volcanoes, this one has been erupting almost continuously since then, burying villages, factories and farmland to now cover an area of almost six square kilometres. Atkins has been monitoring and assessing these risks since early 2007.  This work has included using a combination of remote sensing techniques to map and monitor the growth of the mud volcano as well as ground surface movements and deformation around the mud volcano area.  To date, the remote sensing work has shown that while the flow of mud from the crater area is now being constrained by the earth embankments surrounding the mud volcano, the ground movements are effecting a much larger area, and are potentially also being heavily influenced by anthropogenic factors.  This presentation will provide an overview of the ongoing eruption and how it has developed since 2006.  It will also highlight how the use of remote sensing mapping techniques has allowed for the risks posed by the eruption to be monitored over an extended period of time in an innovative but cost-effective manner, as well as the importance of field verification in such work.’

Dr Andrew Hart is a Chief Engineering Geomorphologist working for Atkins, where is also the Discipline Lead for Engineering Geomorphology, Geohazards and Ground Modelling.  Andrew has over 23 years of experience assessing the impacts of Geohazards and other geo-engineering constraints while working on a wide variety of infrastructure projects.  This has included O&G pipelines and facilities, iron ore railways, highways and mountain roads and offshore wind farms, as well as Geohazard Assessment and Disaster Risk Reduction projects.  This means that Andrew has been lucky enough to work in many interesting parts of the world, with a wide range of client organisations and project teams.

‘The Evolution of the Iceland Plume‘

The mantle plume beneath Iceland is highly unusual: instead of the typical dome-shape at its top it has a number of fingers that stretch as far away as Scotland and Norway, over 1000 km away. The talk will explore the reasons for the existence of these fingers and also the influence they have on the geography of Scotland and Norway.

If possible please use the Hall car park otherwise please park in Coleridge Road or Hartington Grove towards Hills Road.

NB The Friends Meeting House is on the left if coming from the direction of Hills Road and on the right if coming from Cherry Hinton Road (opposite side to the marker shown on the map).

Friends of the Sedgwick Museum

The Friends organise a series of lectures in Cambridge (doors open, 6.15 pm for 7.00 pm in the Department of Earth Sciences)  during autumn and winter and field trips during the spring and summer. They also organise overseas field trip in the UK and overseass. More information.

CNHS organise a series of talks (winter) and excursions (all year). Talks are usually held at the Attenborough Building next to the Zoology Museum. Visitors welcome (small charge) More information.

Courses at the Institute of Continuing Education of University of Cambridge

The ICE holds many interesting courses, at Madingley Hall near Cambridge, including some on geology, local landscape, evolution and archaeology e.g.  Extinctions: crises in the history of life  with Peter Sheldon

Future Learn has a number of short, online courses on geological and related subjects. These courses are free and very easy to follow. Ideal for introductions to many subjects. Courses include Extreme Geological Events, developed by Cardiff University, The Earth in my pocket: an introduction to geology and Extinctions Past and Present.

There are a few local geology groups run by U3A: Cambridge    Peterborough

For details of many other talks and societies in the Cambridge area see the CONDUIT publication issued by the Cambridge Antiquarian Society. It gives contact details for the many organisations working to promote interest in history, particularly that of Cambridgeshire. The latest issue of CONDUIT can be downloaded from their website.